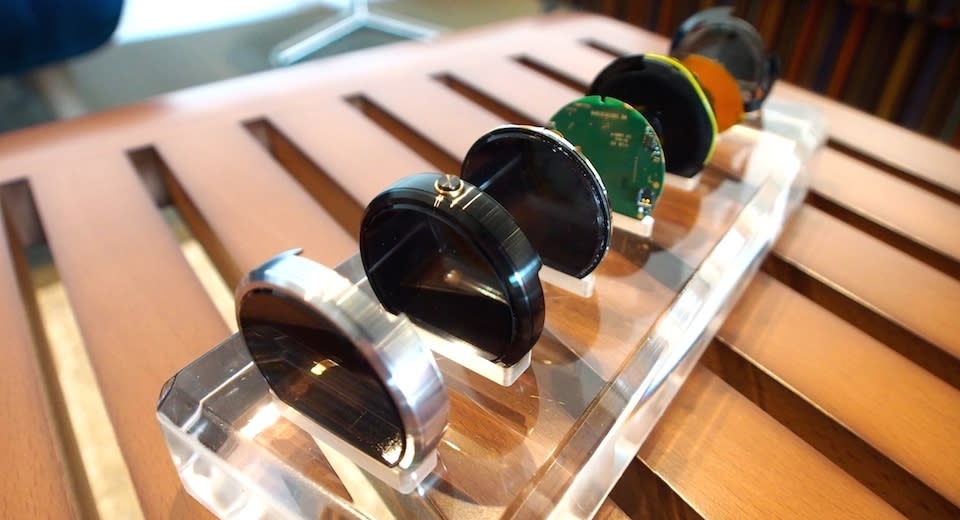 "It's not a smartwatch," said Iqbal Arshad, Motorola's senior VP of global product, to a roomful of journalists in Motorola's Chicago headquarters. Instead he, and by extension the rest of Motorola, prefers to think of the Moto 360 as a reinvention of the humble wristwatch -- more of a modern timepiece than a futuristic gadget. It's with that philosophy in mind that Motorola made the 360 the way it is. That's why its face is round. That's why its leather strap is sourced from the Horween Leather Company, a premium tannery located in the Windy City. That's why Motorola took care to encase the 360 in polished stainless steel. That's why it's providing a premium metal band option later this year. The Moto 360, as far as Motorola is concerned, is watch first, fancy mobile computer second. That's not to say Motorola didn't consider the square shape. In a behind-the-scenes tour of Motorola's spacious facilities, we were shown early prototypes of the 360 that were decidedly rectangular. Design director Dickon Isaacs explains that it was simply the only option for smartwatches at the time. However, when they tested the square mockups with plastic wrist trees -- rough approximations of male and female wrists -- they saw that the fit was clunky and awkward. "They just weren't very wearable," he said. Further, he said that when most people think of a watch, they think of a circle with straps attached. It's what he calls a "stored shape" -- a universally accepted idea of what something should look like.

So the team decided to go all-in on a round watch. But even that had its challenges. Beyond working with Google to come up with an Android Wear UI that'd play nice with a circular screen, it also wanted a round face that was wide enough to accommodate "glanceable information." So instead of creating a round watch with a thick bezel, it opted for as much screen as possible -- it's why the 360's glass goes almost edge to edge. Unfortunately, that meant the team had to house the watch's display drivers and ambient light sensor in a rather noticeable black slice at the bottom of the display. That was the price Moto was willing to pay to get more screen out of a round display.

The result is the watch that got arguably the most buzz when Android Wear was announced earlier this year. Sure, LG and Samsung came to market first with their square iterations, leaving Motorola to be third out of the gate. But seeing as LG is also now dabbling in the round-watch territory (and Samsung too apparently), Moto's instincts might not be off the mark. For more on how the Moto 360 came to be, take a look at the gallery above where we walk you through the early mockups, the 3D printers they used for the initial prototypes and more. As for our final thoughts on the 360? Well, that will have to wait for our full review. Stay tuned.

In this article: mobilepostcross, moto360, motorola, smartwatch
All products recommended by Engadget are selected by our editorial team, independent of our parent company. Some of our stories include affiliate links. If you buy something through one of these links, we may earn an affiliate commission.