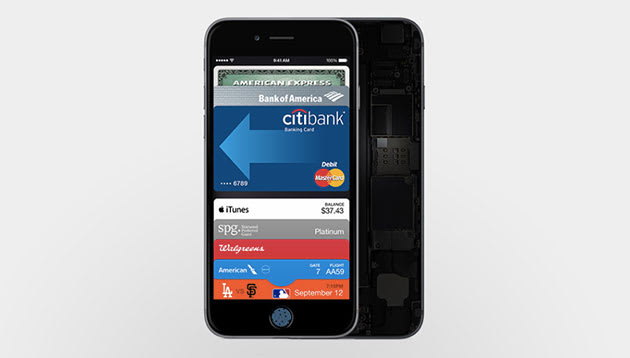 For years, Apple has resisted including NFC connectivity inside its iPhone handsets... until now. With the arrival of the new iPhones, the folks in Cupertino are finally including the option that will sort mobile payments. What's more, it's doing so with a process it built for use on its handsets: Apple Pay. The new feature is included on both the iPhone 6 and iPhone 6 Plus and uses NFC, Touch ID and a Secure Element chip to keep that precious info under lock and key. So how does it work? Well, you add a card to your iTunes account, which then adds it to Passport. You can also suspend payments with Find My iPhone if your card gets lost or stolen without the need to make a phone call. In terms of security, Apple doesn't know what you're buying, and cashiers won't even see your name. Instead, a one-time payment number and a dynamic security code complete the transactions.

At launch, American Express, MasterCard and Visa are all on board, with a load of banks (Bank of America, Chase, Citi, Wells Fargo and others) opting in to Pay as well. As far as retail is concerned, Apple Stores, Bloomingdale's, Macy's, Walgreens, Subway, McDonald's, Whole Foods and many more will allow you to pay for goods with that newfangled iPhone or the outfit's wearable. For shopping on the web, there's a one-touch feature that replaces the need to manually enter a card number, shipping address and other info. Once again, no credit card info is shared with merchants. Apple Pay is set to arrive in October via a free update to iOS 8, and will be available on the iPhone 5s, 5c and 5 in addition to the newly announced devices.

Source: Apple (Business Wire)
In this article: apple, applepay, iphone, iphone6, iphone6plus, iphoneevent2014, mobilepayments, mobilepostcross, nfc, poll, wedgies
All products recommended by Engadget are selected by our editorial team, independent of our parent company. Some of our stories include affiliate links. If you buy something through one of these links, we may earn an affiliate commission.