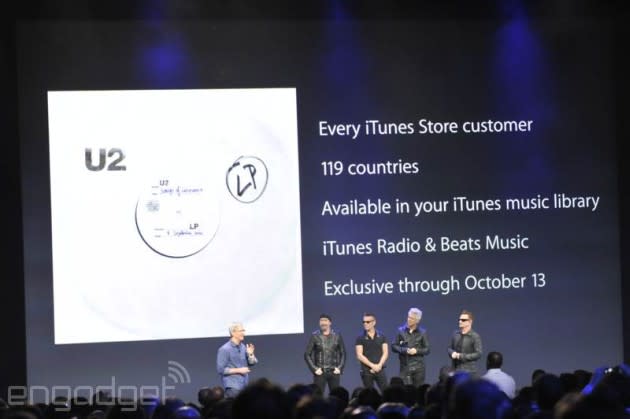 To close out today's event, Apple CEO Tim Cook and U2 announced that the band's newest album is launching right now on iTunes. It's available free, and will be there exclusively until October 13th to all account holders. If you don't have an account, just create one within the next five weeks and you can download all 11 tracks from Songs of Innocence free of charge. The servers are (predictably) a bit slammed, but it should be available right in the albums section of iTunes on PCs or your Apple device to download it. It will also be available on iTunes Radio and Beats Music for streaming, starting tomorrow. U2 closed out the show by performing the album's lead single "The Miracle (Of Joey Ramone)." Rolling Stone has some details from band members about the collaborations (Danger Mouse, Flood and some of Adele's producers) and influences for the album, but check back here to get our first impressions of both new iPhone 6 models, and the Apple Watch.

In this article: apple, iPhoneEvent2014, songsofinnocence, u2, video
All products recommended by Engadget are selected by our editorial team, independent of our parent company. Some of our stories include affiliate links. If you buy something through one of these links, we may earn an affiliate commission.