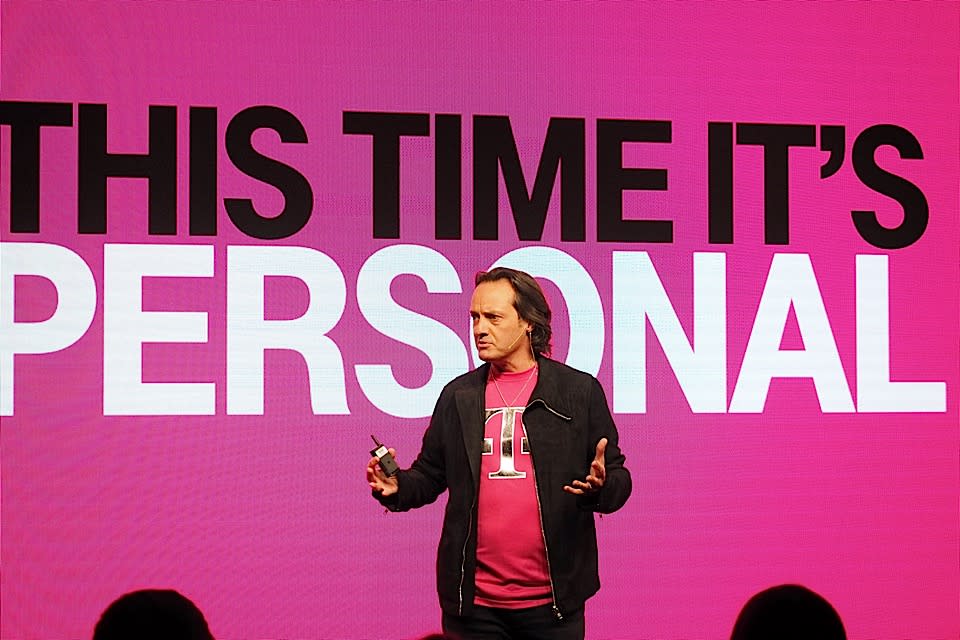 It seems as though T-Mobile is speeding up on this whole UnCarrier thing. Speaking in San Francisco -- not in Vegas, where the other carriers are hanging out at CTIA -- CEO John Legere and Friends announced its latest move: Free WiFi calling and texting to all customers and corporate accounts. From here on out, every smartphone the carrier sells will come with the capability, and if you don't have one already, you're eligible to get one through T-Mobile's Jump early upgrade program. A nice benefit of this feature is a seamless transition from the network's Voice-over-LTE (VoLTE) coverage to your WiFi network.

On top of this, T-Mobile is announcing a special partnership with Gogo which lets customers send in-flight messages -- SMS and MMS -- using the plane's WiFi network. You can also access your visual voicemail as well, which means you can at least reply to the sender of that message via text and let them know you'll get back to them after your flight. Granted, you still don't have the ability to get free data through Gogo, but it'll still be a fantastic chance to stay in constant communication with the ground below you. This may be the most interesting announcement of the event, since the company has an exclusive multi-year agreement with Gogo (straight from the mouth of CMO Mike Sievert, even), and it feels like it's addressing a major pain point that many of us experience anytime we travel.

Finally, T-Mo revealed that it wants to loan out branded wireless routers for free to any customer who wants it (and is willing to pay a $25 deposit, which you'll receive as soon as you return the equipment). Dubbed the T-Mobile Personal CellSpot, the ASUS-made hub is capable of dual-band 802.11ac, along with plenty of other standard router features -- reps stated that it likely has more features than anyone else's router. The idea is for the CellSpot to prioritize your HD WiFi calls while attached to your network; if you're on a call and your significant other turns on Netflix on the other side of the house, your call will no longer be dropped in the name of data use.

In this article: johnlegere, mobilepostcross, t-mobile, tmobile, uncarrier, uncarrier7, uncarrier7.0
All products recommended by Engadget are selected by our editorial team, independent of our parent company. Some of our stories include affiliate links. If you buy something through one of these links, we may earn an affiliate commission.