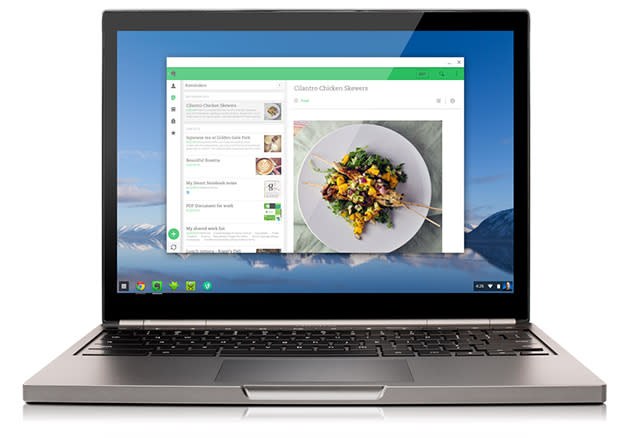 Google promised that Android apps would eventually make their way to Chrome OS, and, well, here they are - the search giant announced that the first batch has just gone live in the Chrome Web Store. We knew that Vine and Evernote were on the short list of Android apps to make the leap, but there's no sign of Flipboard yet. Instead, we also got startup Duolingo's excellent language learning app and something called Sight Words, a tool to help little ones identify and recognize words (aww). Four apps may not seem like much to get worked up over, (especially since Duolingo and Evernote work just fine in a web browser) but it's just a start. Google says it'll work on getting more developers to use its App Runtime for Chrome "over the coming months," so don't go expecting a full-on Android invasion of Chrome OS any time soon.

In this article: android, apps, chrome, chromebook, chromeos, developers, evernote, google, vine
All products recommended by Engadget are selected by our editorial team, independent of our parent company. Some of our stories include affiliate links. If you buy something through one of these links, we may earn an affiliate commission.