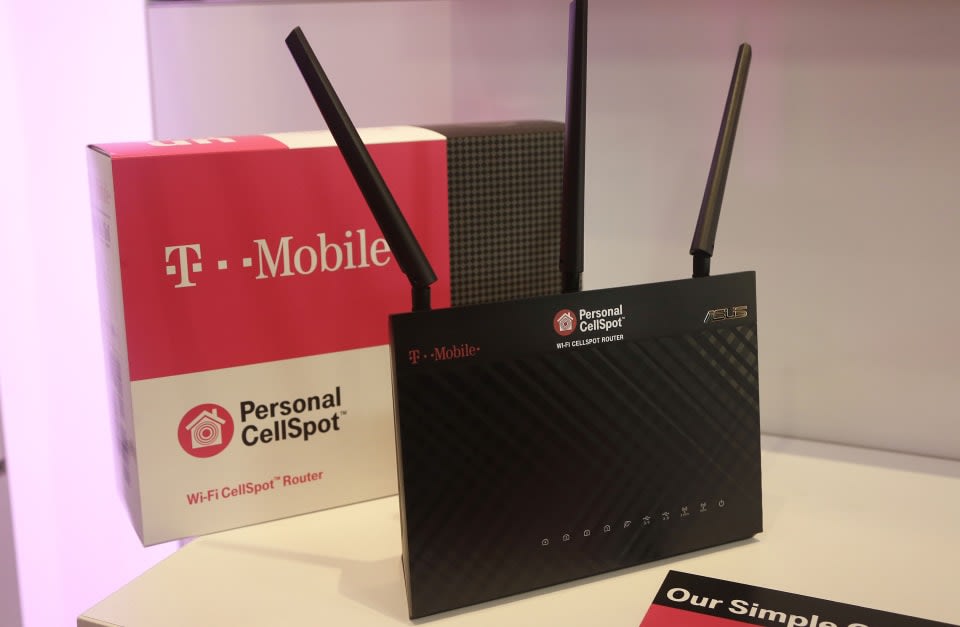 If you're a T-Mobile customer, your company just gave you a very unexpected gift at yesterday's UnCarrier event: a wireless router. Yes, a fully functioning, magenta-branded, ASUS-built router, which can do essentially everything your current router can do -- and if yours is old, this will likely do even more. The device, which would cost roughly $200 if you purchased it on Amazon without T-Mobile's tweaks, only requires a $25 deposit, which gets returned to you once you're done using it. The company is going all-in on its commitment to providing every subscriber and every carrier-branded smartphone with free WiFi calling, and the router -- called the T-Mobile Personal CellSpot -- is the icing on the cake. But, you may ask, why is this a thing that's happening in the year 2014, especially when most of us already have access to a router (and thus, WiFi calling) nearly everywhere we go?

It's a very good question, because the CellSpot isn't a necessity if you want to take advantage of WiFi calling at home, work or the local Starbucks. Chances are you already have a router that can handle that, but CMO Mike Sievert believes customers will enjoy it because it's a portable device that's easy to set up wherever you go. "Your office, home, man cave, cabin, any place you get broadband, you can now get T-Mobile coverage," he said. More importantly -- especially for those who still use their phones as, y'know, phones -- it also prioritizes your HD-quality calls over any other activity on the network; on most routers, your call might get dropped when your significant other starts binge-watching Breaking Bad, whereas the CellSpot ensures that your call gets saved at the expense of your family's Netflix marathon. 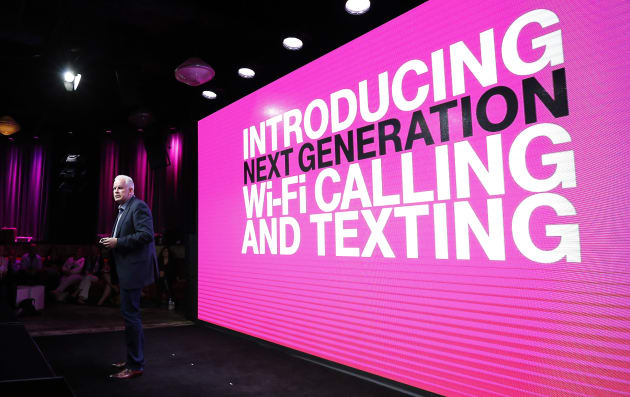 Of course, there are enough benefits on T-Mobile's side to justify the new program. At yesterday's event, CTO Neville Ray mentioned that the carrier's traffic has grown by more than 10 times from three years ago, and given the company's recent growth (it added nearly 3 million new subscribers in August alone, which is a record for T-Mobile), it makes sense to find alternative methods of alleviating the additional burden that comes with it. Thus, when you use the CellSpot (or any WiFi calling, for that matter), everybody wins: The network is less saturated for customers who aren't in the vicinity of a WiFi hotspot, and subscribers get themselves a brand-new router and full bars of service.

The idea of loaning out equipment to help subscribers improve their coverage isn't new. Microsites (also known as femtocells) have been around for a while; AT&T, Verizon and Sprint have all offered the tech as the 3G MicroCell, Verizon 3G Network Extender and AiRave, respectively. These devices used your home's landline or broadband service to offer more bars of coverage in your home or office, which came in especially handy if your abode or workspace fell smack-dab in the middle of a network dead zone. However, these could only be used as peripherals to your WiFi router, instead of replacements. T-Mobile's new option hits two birds with one stone, providing you with a fresh ASUS 802.11ac router that also happens to boost your signal.

That said, there's one tiny misnomer in T-Mobile's marketing efforts: Throughout yesterday's event and on the company's website, the company said that the CellSpot program is "like adding millions of towers to your network every single day." That may technically be accurate, but it's misleading because you don't have open access to all of those towers; T-Mobile customers won't be able to use everyone else's CellSpots for service as they walk down the sidewalk. CEO John Legere says that such a concept isn't completely out of the question in the future, but it just wasn't feasible for UnCarrier 7.

"Do those CellSpots become T-Mobile-ubiquitous sites? Not yet, but we're going to try to solve that as the industry moves," he said. "That's the start of WiFi being a tied-in component to the network. At some point, I wouldn't rule out every personal CellSpot becoming a tower, but we couldn't get there yet." It's certainly food for thought for upcoming UnCarrier moves (though Legere says there are plenty of ideas in the funnels for 8.0, 9.0 and 10.0 already, and this item likely isn't on the agenda), as long as T-Mobile can find a way to do it without jeopardizing the privacy of its CellSpot owners. If any John Doe can come along and hook up to your network, it would raise a whole new set of concerns.

Sure, handing out routers seems like a random move for even T-Mobile, but it's a solid one. And if you're a customer (or are thinking of making the switch), it's hard to say no to a free wireless router. It'll be available in stores beginning September 17th.

Coverage: T-Mobile
In this article: asus, cellspot, femtocell, hdvoice, hotspot, mobilepostcross, personalcellspot, router, t-mobile, tmobile, wificalling
All products recommended by Engadget are selected by our editorial team, independent of our parent company. Some of our stories include affiliate links. If you buy something through one of these links, we may earn an affiliate commission.