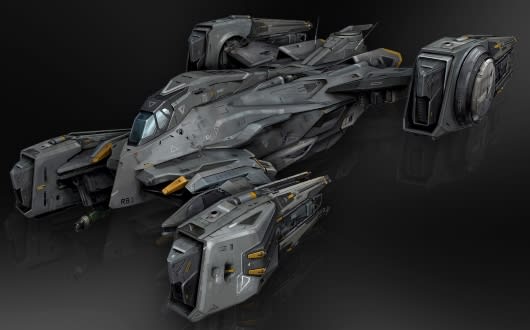 Transverse, the new crowdfund project from Piranha Games, could have been called something far different and more familiar: Wing Commander Online.

Piranha Creative Director Bryan Ekman confirmed that the studio currently holds the Wing Commander license but decided to go another way: "By late 2013 we found ourselves in possession of an exclusive license to Wing Commander and assembling a small team to craft a new experience. We spent six months developing, designing, and working on a marketing video with help from outsourcing partners [...] We reached a pivotal moment when some of our best design ideas were being pushed to the side as they just didn't fit within the constraints of a WC game. We looked carefully at what our WCO product was, looked at other competing products, and decided that we needed to move away from the Wing Commander universe."

Ekman said that if Transverse does not completely fund by the end of its campaign, the studio will fully refund its backers and investigate "traditional models" for investment. In the meantime, the entire studio has been shadowbanned from Reddit for creating a Transverse sub and is looking to overturn the ban.
Source: Transverse forums, Shadowban notice
Coverage: Transverse
In this article: Bryan-Ekman, piranha, piranha-games, reddit, sci-fi, shadowban, shadowbanned, subreddit, trailer, transverse, wco, wing-commander, wing-commander-online
All products recommended by Engadget are selected by our editorial team, independent of our parent company. Some of our stories include affiliate links. If you buy something through one of these links, we may earn an affiliate commission.