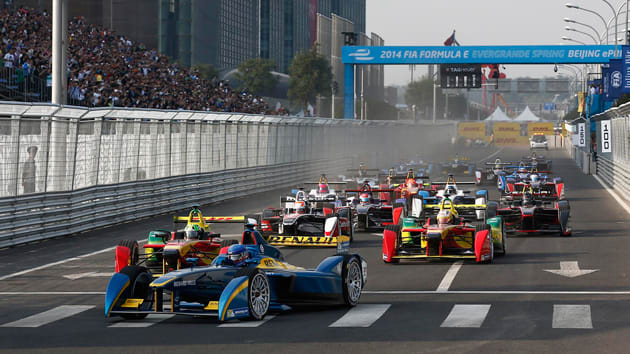 Worried that the all-electric Formula E racing league will somehow be less exciting than its gas-powered Formula 1 counterpart? Don't be. The inaugural Beijing race ended on Saturday with about as much drama as you'd expect from conventional motorsports. The last lap involved a neck-and-neck battle between Renault's Nicolas Prost and Venturi's Nick Heidfeld that ended in a spectacular crash at the last corner (shown below); Prost says he inadvertently clipped Heidfeld while jockeying for position. Audi's Lucas di Grassi ultimately claimed the historic first win by waltzing past his wrecked rivals. There's no guarantees that the upcoming Malaysia race will produce such a spectacular finish, but it's clear that eco-friendly competitions don't necessarily lead to friendly driving.

Via: Autoblog
Source: FIA Formula E
Coverage: BBC, Nicolas Prost (Twitter), Nick Heidfeld (Twitter)
In this article: electriccar, electricvehicle, fia, formulae, motorsports, racing, transportation, video
All products recommended by Engadget are selected by our editorial team, independent of our parent company. Some of our stories include affiliate links. If you buy something through one of these links, we may earn an affiliate commission.