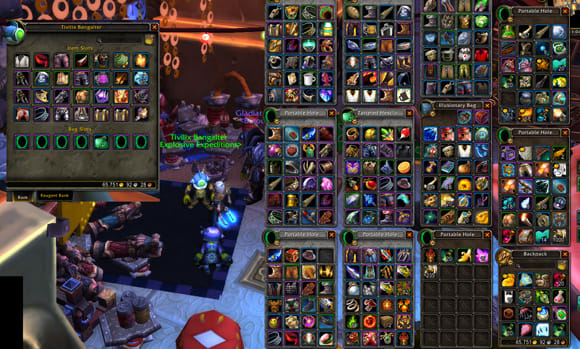 Those bags in that header image may look like a disorganized wreck now, but they're about to get cleared out a little sooner than expected. Blizzard released a preview of upcoming UI changes for patch 6.0.2 yesterday -- that's patch 6.0.2, the pre-patch for Warlords of Draenor, not the expansion itself. Along with all the pre-expansion content quests, the new character models, and the preview of Upper Blackrock Spire, we also get all those lovely space-saving improvements ahead of time. That's on top of a host of other really cool UI improvements, including a new and improved Group Finder that includes the Premade Groups function.

In addition, the new map and quest log will make an appearance, the new Void Storage tab will be unlocked, you'll be able to check out your handy new reagent tab in your bank, and you'll be able to sort your bags more easily than ever before. I have to admit, while I'm excited about being able to sort my mounts and pick a few favorites, I'm far more excited to see rows and rows and rows of empty bag slots. For more of what to expect in patch 6.0.2 and how this will change the way you play, check out Blizzard's full preview on the official site.