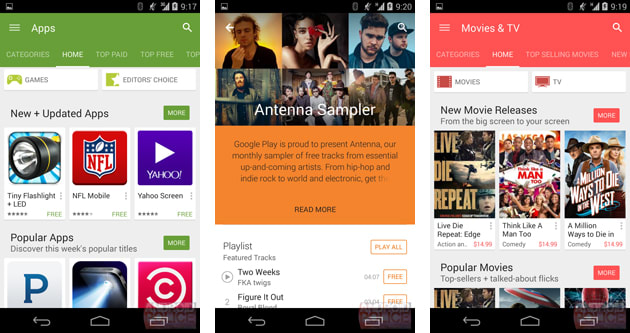 Google may have already given Android's Play Store a big makeover this summer, but it's not done yet -- there's another revamp coming this year. Android Police has posted shots of a pre-release Play Store 5.0 update that's very clearly guided by Google's Material Design concept. While it's not quite as dramatic an overhaul as what we saw a few months ago, it's still a pretty noticeable change. Swaths of bright, solid color are everywhere, and there's even more of an emphasis on title pictures. You should get some extra function to go with this form, too; code buried in the update hints that you'll get to restore apps on a per-device basis, making it much easier to recreate your setup from an old phone. It's not certain just when the new Play Store will go live, but it's reasonable to presume that you'll see it around the same time as the similarly-styled Android L update.

Source: Android Police
In this article: android, google, googleplay, googleplaystore, materialdesign, mobilepostcross, playstore, smartphone
All products recommended by Engadget are selected by our editorial team, independent of our parent company. Some of our stories include affiliate links. If you buy something through one of these links, we may earn an affiliate commission.