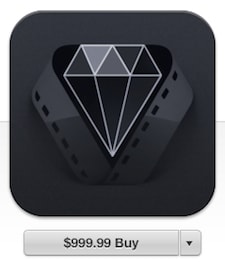 Now, before you say that it's a gimmick and something that only rich people will buy, let me explain a little bit about the Vizzywig 4K app and what it does.

This app turns an iPhone 5s into a 4K motion video camera, editor and 4K distribution platform. It captures full 4K resolution photos (3840 x 2160 pixels) at 24 photos per second while capturing an audio soundtrack separately. That's a lot of photos being stored very quickly, at a data rate of 576 megabits per second. You'd better have a lot of space available on your device to hold your movies.

To view these amazing videos in all of their UHDTV glory, you'll need to have either a computer with a 4K display, a 4K projector of some sort, or access to a movie theater that will let you show your movies. Note that when you watch our sample YouTube video below, you're probably watching a downsampled version at 720p or 1080p. If you have a 4K-capable setup, please let us know what the video looks like.

Now, Vizzywig creator Michael Zaletel has a lot of experience using 4K video cameras. He's been a member of the RedUser.net forum (a home for owners and users of the RED 4K, 5K, and 6K cameras) for over 6 years, so he knows just how expensive it is to buy and maintain a 4K camera, not to mention build a full editing and distribution workflow for it. To quote Zaletel,

"The reality is the world's fastest full 4K workflow. Pull a small phone out of your pocket, shoot four or five true 4K clips, trim, rearrange, add transitions, lower thirds, titles and credits in 4K and export and upload to YouTube or Vimeo in 4K in 15 minutes without ever touching a data card, laptop, mouse or NLE. We have all spent more than $1K on a single data card and 10 times that on a single lens or tripod.

Vizzywig 4K is really not for everybody. It's targeted at video professionals who might want to be able to shoot a quick video and get it sent off immediately to a client. I've used the "normal" Vizzywig app in the past, and it's an amazing way to shoot, edit, and distribute video from an iOS device. At Macworld/iWorld 2014, a number of my video pieces were shot with an iPad mini running Vizzywig ($29.99), edited, titled, and then uploaded to our content distribution network and YouTube. All of that was done on the iPad mini, with me standing up instead of sitting at a video editing suite.

The app UI will be familiar to anyone who has used the less-expensive HD version of Vizzywig. Settings are a bit different, as you can adjust the session and multi-camera resolution from 4K downwards, adjust the quality of the individual JPG images that are captured, change the frame rate, play with the 4K export quality (default is 75 Mbps), and so on. As with the HD version of Vizzywig, you can then add titles, transitions, scrolling credits, and even background music.

One other feature of the app -- when you spend your $1,000 on the app, you get VIP email, phone and text message support directly from Zalatel.

So, how did Vizzywig 4K work? Well, I had to downgrade my iPhone 5s from iOS 8 GM to iOS 7.1.2 in order to run it, and decided at that time that it would be a good idea just to leave the device empty except for the app. With that in mind, I had a clean machine all ready to go for this app.

I decided that since it was such a nice Colorado late summer day that I'd grab the iPhone and try doing some shooting on one of my favorite walks. I took a couple of shots, then came back to my office to add titles and credits, then render the movie. The rendering took quite a while -- there were 1,500 frames to process, and that took about 18 minutes total. After than, the app generated the video, which took about another 12 minutes. Uploading over WiFi took a while as well, although that was a fairly painless part of the process.

Please don't judge the app's capabilities on my lousy camera work -- I didn't have a tripod, a stable mount, or the time to make sure that all my zoom shots stayed in focus. Zaletel recommends that potential users have a Steadicam Smoothee or Swiftcam M3 stabilizer on hand for best results. Here's the video:

I've also included a gallery of 4K images so that you can see what the individual 3840 x 2160 pixel frames look like:

Finally, if you'd like to see a 4K movie produced by Michael Zaletel that's a bit more stable than mine, you can view it here on YouTube.

One other comment -- plan on bringing a large capacity external battery pack with you if you plan on doing a lot of shooting and rendering. My fully charged iPhone 5s dropped to about 38 percent battery capacity by the time I was done shooting, rendering, and uploading the video. I also recommend plugging in your iPhone while you're doing the render and upload. Uploads can be made to YouTube and Vimeo at the present time.

The file size for my 1 minute and 33 second video was 587.53 MB. Needless to say, if you plan on doing any sort of long videos using 4K, you're going to want the most storage capacity you can find. I think the iPhone 6 or 6 Plus with 128 GB of storage might be perfect...

With that in mind, I asked Zaletel about compatibility with the iPhone 6 and 6 Plus, which both run iOS 8 by default. He said that the company has both devices on order and their top priority is to update the app to take advantage of the better camera and larger storage capacity of the new devices. While you may not be able to run Vizzywig 4K on your shiny new toy on Friday, rest assured that you'll see the update soon. I, for one, would like to see if the future Vizzywig 4K could take advantage of the Optical Image Stabilization feature of the iPhone 6 Plus.

Zaletel did point out that his company, i4software, is looking at their own Hyperlapse-like stabilization: "We are also working on adding image stabilization by measuring the gyroscope and accelerometer movements for each frame and then rotating and scaling each frame slightly to align for perfect stabilization similar to the new Hyperlapse app from Instagram." Vizzywig 4K apparently works by capturing those big frames using burst capture. There's a known issue with iOS 8 at this time regarding burst capture that will have to be fixed prior to the app going live on the new OS.

Now, about the pricing. Is $1,000 a bargain compared to a standard 4K video camera and all of the accessory lenses? Yes, absolutely. But I think Zalatel -- who is offering a Moondog Labs Anamorphic Lens and a Swift M3 Handheld Gyro Stabilizer to the first person who coughs up $1,000 -- would be selling this app like hotcakes if he priced it at $49.99 or even $99.99.

While the average professional videographer who can drop $50K on a top of the line camera without blinking might not consider $1K to be out of the question, the rest of us in the real world do. On the other hand, most of the rest of us don't have the need to be shooting 4K UHDTV, since we don't have the equipment to even properly view the output. Viewing the YouTube output on my really fast 27-inch iMac -- which doesn't have the ability to even fit that 4K stream on the screen -- is not that impressive, with a lot of jerkiness.

There's a basic law of economics called price elasticity of demand. In most cases, prices are elastic, meaning that as price drops, the volume of sales goes up and vice-versa. At $1000, I would seriously doubt if Zaletel will get many sales, although he's capturing a lot of attention from the tech press. At $50 or even $100, a lot more people are going to be willing to make the purchase for an app that performs some video magic that can't otherwise be accomplished without spending a lot more money. A straw poll of the team at TUAW and several other blogs showed that nobody was willing to drop $1K on an app with the capabilities of Vizzywig 4K, while many with the need or desire to shoot 4K video would spend $50 in a heartbeat.

Another thought -- since Zaletel has now proven that it's possible to shoot and render 4K video on an iPhone, some other enterprising developer will probably create an app that will do so and sell it for a fraction of Vizzywig 4K. I really like the stability and capability of Vizzywig and Vizzywig 4K, and would love to see this amazing technology continue forward. So please, Michael, drop the price.

The app itself is great and does some remarkable things. It has put a 4K video camera and editing suite into an off-the-shelf iPhone 5s -- a truly amazing feat. But Vizzywig 4K could do so much more if it was priced sensibly.

In this article: 4K, features, iPhone, review, UHDTV, video, videography, vizzywig, vizzywig 4K
All products recommended by Engadget are selected by our editorial team, independent of our parent company. Some of our stories include affiliate links. If you buy something through one of these links, we may earn an affiliate commission.