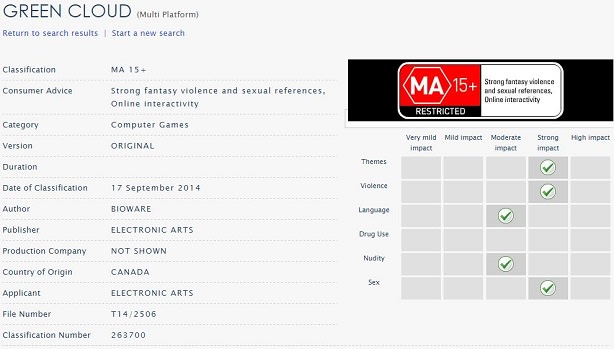 An entry for a new game from Mass Effect and Dragon Age series developer BioWare appeared on the Australian Classifications Board website this week. Listed under "Green Cloud," presumably as a code-name, the game earned a MA 15+ rating from the board due to its "strong fantasy violence and sexual references" as well as online interactivity.

Nothing else is known about Green Cloud, though it is listed as a multiplatform game on the ratings website. No listing for Green Cloud appears when searching ESRB and PEGI's directories. BioWare did reveal its 4-on-1 action RPG at Gamescom in August, Shadow Realms. The next game from the studio is Dragon Age: Inquisition, which was delayed to November 18 as of July.
[Image: Australian Classifications Board]
Via: IGN
Source: Australian Classifications Board
In this article: australia, australian-classification-board, BioWare, EA, Electronic-Arts, green-cloud, listing, ratings, shadow-realms
All products recommended by Engadget are selected by our editorial team, independent of our parent company. Some of our stories include affiliate links. If you buy something through one of these links, we may earn an affiliate commission.