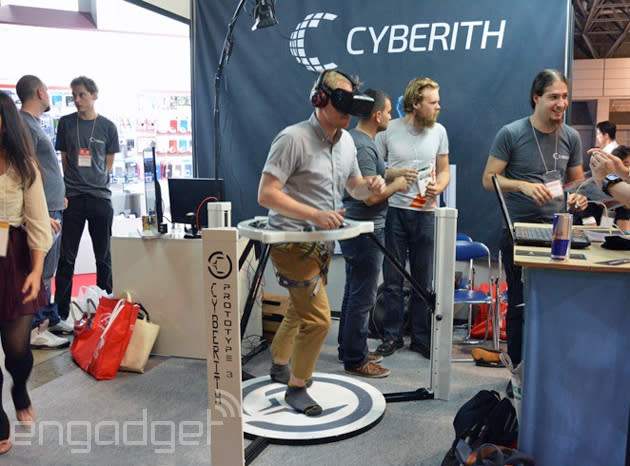 There was no shortage of VR headsets at the Tokyo Game Show this year -- but that didn't stop the lines forming endlessly over the weekend. Hidden, at least slightly, in Hall 8 was Cyberith, demonstrating their now successfully crowdfunded VR gaming mat, the Virtualizer. It pairs a second-generation Oculus Rift headset with three different sensor arrays, which, with the assistance of a low-friction mat and some "rental socks" from the Cyberith team, we got to test it out. How does it work and (most importantly) when can the rest of you play it? Well, for the latter, a commercial product is planned for launch in 2015 and for the former, we'll let the founders do some of the explaining in a quick video after the break. We'll fill you in on the rest. Running while strapped into the Virtualizer takes some skill -- we weren't entirely satisfied with our zombie-like gait. That said, we didn't realize this until we saw the video above: the team is getting the immersion part very right. To ensure you're able to rotate around and slide-jog in any direction, the wiring for the Oculus Rift headset is attached to an arm, meaning no wire-based mishaps, and making it feel kind of wireless -- even though it's still very much tethered.

Let's break down the sensors at work inside the Virtualizer itself: there's six holes in the flat base plate, with optical sensors tracking your feet. As they trace over these holes, the computer does the math to work out which way you're attempting to virtually go. These sensors also work in tandem with those found in the ring that goes around your torso, monitoring the positioning and adjusting your in-game movement to match. The clever thing about Cyberith's gaming setup, however, is the third sensor group, inside the trio of pillars keeping that torso ring up. Inside, sensors also monitor the height of the player -- and because it's sensor based, crouching becomes less of a toggle-based function, but something that could (depending on games that choose to use it) be an analogue range of motion.

Playing a demo inside the system was, well, fun. The horror-based demo we (literally) walked through, however, didn't entail any sort of in-game controls: movement was all done through your legs and we liked the fact that you could also walk backwards, once you got the knack of walking-jogging on the spot. Depending on the movement speed of your feet, this directly translates to the game, although turning gently while moving appears to be something that needs a little training. This particular game wasn't compatible with virtual movement, so we couldn't crouch while strapped into the manbaby-bouncer, but Cyberith informs that it's working to add full support to all movements inside virtual gaming worlds -- and other VR-powered projects. Although you're strapped into the thing, it doesn't drag or weigh you down that much, as the pillars around the ring keep it supported for you. Kickstarter shipments are scheduled to arrive in March 2015 and to see some early demos of what they're already working on, we'd advise taking a look at the team's crowdfunding pitch below. 180-degree mid-game jumps are the future of gaming. We hope.

In this article: crowdfunding, cyberith, oculusrift, tgs, tgs2014, TokyoGameShow, video, virtualizer, virtualreality, vr
All products recommended by Engadget are selected by our editorial team, independent of our parent company. Some of our stories include affiliate links. If you buy something through one of these links, we may earn an affiliate commission.