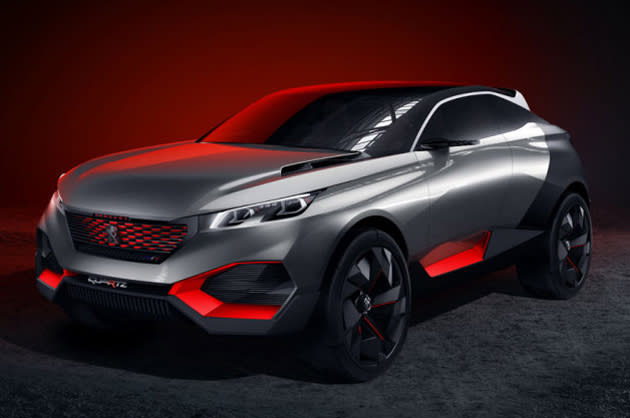 If you had any lingering concerns that hybrid cars were boring, Peugeot just smashed them to bits. Its new Quartz crossover concept blends the muscular, offroad-ready profile of a small SUV with green powerplants and aerodynamics that could give better hybrid sports cars a run for their money. The 270HP turbo gas engine is nothing special, but it's mated to two 114HP electric motors that either give you a heap of extra performance or else move the vehicle by themselves. Peugeot reckons that you'd get 31 miles of purely electric driving -- that's not spectacular, but it's solid for an all-purpose ride that's equally at home on gravel roads and racetracks. The French automaker isn't giving any hints that the Quartz will reach production, so don't expect to get the keys to this exact machine any time soon, if ever. If nothing else, though, the concept is proof that you don't have to give up speed or flexibility when you're getting an eco-friendly car.

In this article: concept, crossover, cuv, hybrid, parismotorshow, ParisMotorShow2014, peugeot, quartz, transportation
All products recommended by Engadget are selected by our editorial team, independent of our parent company. Some of our stories include affiliate links. If you buy something through one of these links, we may earn an affiliate commission.