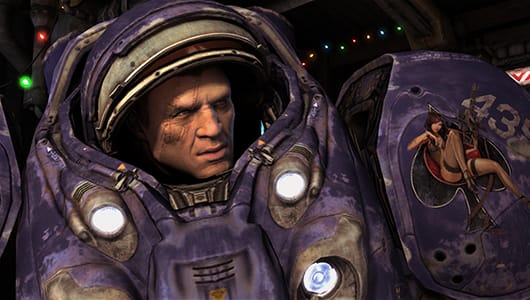 StarCraft is of immense importance to the world of online gaming. It's one of the franchises responsible for establishing Blizzard Entertainment as a titan (get it!?) of the games industry. It serves, for many, as the ideal example of what an RTS game should aspire to be. And it was among the first titles to transcend one-off competitions and contests to become a global e-sport featuring pros who make the big bucks and events watched by millions.

Without StarCraft, there would be no Dota 2, no League of Legends, perhaps no SMITE or Infinite Crisis. The MOBA niche, now one of the most profitable areas of online gaming, might not exist if not for the original StarCraft's custom three-lane Aeon of Strife map. StarCraft and its sequel, StarCraft II, represent the quintessential essence of small-scale online warfare.

As a fan of MOBAs and an ardent lover of clicking things quickly, I took a spin in StarCraft II in an effort to better understand the foundation of the games I enjoy. What I discovered was a difficult, punishing game that demands your full attention and gives you plenty of reasons to keep coming back.

First, a disclaimer: I've played StarCraft II before. I don't think it's a secret at this point that I'm an ex-employee of Blizzard Entertainment; my time there overlaps ever-so-slightly with the launch of StarCraft II. The game was a huge deal in the office, as you might imagine. Employees spent many lunch breaks engaged in Terran vs. Zerg vs. Protoss skirmishes, and it wasn't uncommon for people to stick around after work, chaining matches for hours at a time. I played the game only once during my tenure there -- all employees were asked to run through the starting campaign missions so that we'd be more familiar with the game when support inquiries started rolling in. 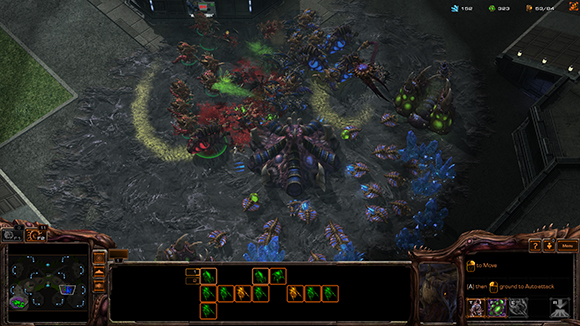 Other than that, I had never played a StarCraft title until just a few weeks ago. I had certainly never hopped into matchmaking and challenged an actual human opponent. There is a massive difference between being guided through starter levels by a StarCraft expert and having your base bashed to pieces by a merciless anonymous foe, the latter option being the thing that happened to me most commonly during this recent experiment. I went into StarCraft II as a complete and total noob. No background with the game, no experience with its predecessor, and no knowledge of the title beyond knowing it offered three factions and something widely referred to as a "Zerg rush." And in the interest of keeping the experience somewhat pure, I eschewed online research and elected to figure things out for myself.

If you're an experienced StarCraft player, you probably already know how that went.

While StarCraft II does offer a single-player campaign that partially teaches the basics of base management and unit building, there's no argument that the core draw to the game is online competitive play. The StarCraft franchise has survived for 15 years not on the strength of its solo player offerings but on the frenetic chaos found in battles between actual real-life opponents. I spent the majority of my play time with the game engaged in live matches, though I will happily admit to occasionally roasting the "Easy" A.I. after a tough defeat just to make myself feel like a competent video game person again.

The first few matches of your StarCraft II career are likely the worst. Rather than matching you with other starting players, the game spends some time assessing your skills by throwing players of varying experience directly in your path. This means that it's possible to play your first online match against an opponent who has played hundreds, which in turn means your first online match isn't going to be a ton of fun. It's perhaps a necessary evil, though, as there's no guarantee a level one StarCraft player isn't just playing from a new account or coming in from the a high slot on the original StarCraft ladder. Things balance out after a few matches. 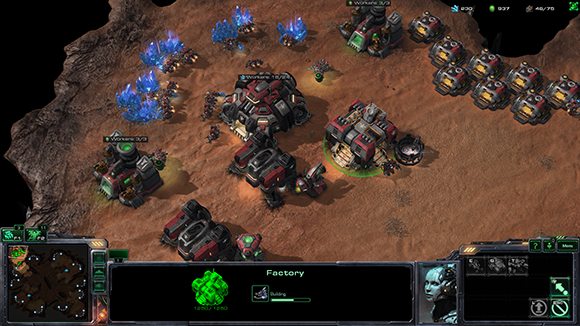 The core gameplay of StarCraft II works like this: You build structures, structures build units, and units serve some sort of specific purpose on the game map. Some are offensive, designed to assault enemy forces and destroy structures. Some are defensive, designed to protect and gather your resources. Every game of StarCraft II is a race against your opponent to build the most powerful force in the shortest amount of time; the strategy comes from how well you do this while managing resources and adapting to the tactics employed by your foe. If you're a League or Dota player, think of it as being just like the game you play, except in addition to controlling your champion you must also build and control towers, creeps, your base, and everything else on the screen.

It is in the building process that new players encounter the first major hurdle. While there's something to be said for the raw skill of rapid clicking and micromanagement, most StarCraft II matches are won or lost on build orders. Like chess, StarCraft II has established, familiar gambits designed to inflict specific types of punishment on enemy players. Build orders are common, efficient methods of creating units and structures that yield the biggest advantage with the least time spent. If you're experienced, you can scout out the enemy base to get a clue of which gambit they are employing, and then work on a counter strategy. If you're new and have no knowledge of these StarCraft staples, you're in serious trouble. Approaching live matches without a basic understanding of common build tactics for all three factions is a recipe for disaster.

Sliding down the learning curve

There's a wonderful image floating around the web that shows EVE Online's learning curve as more of a horrifying cliff. StarCraft II is similar in this regard. There are hundreds of things to learn, all of which are important to your success. Understanding what to build, where to build it, when to build it (and when not to build it) takes hundreds of matches and considerable offline research. Expanding that knowledge beyond one faction takes even more effort. StarCraft II is not a game you can play passively; if you want to improve, you have to work for it. It will not reward you for simply clicking better the next time around.

As a new StarCraft player, I suffered many defeats. I watched my base explode over and over again. What is most frustrating about these losses isn't that they are losses but that it is very hard to understand why they are losses. StarCraft II doesn't explain online strategy to you, and it certainly doesn't say, "Well, that time you lost because the enemy used a Stalker rush, which can be effectively countered by building Marauders earlier in the match. If you scout a Cybernetics Core, expect this rush in future matches." Losing in StarCraft II isn't a matter of "Oh, I needed more kills/points" but a matter of "What the hell are those flying things and oh my god my base is on fire." Reading and learning about strategy is as much a part of playing StarCraft as actually giving your units commands. 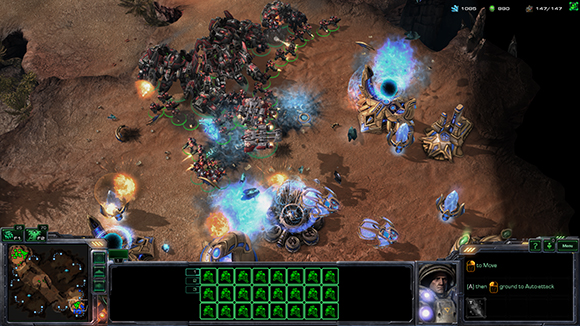 Despite all the frustration and difficulty, StarCraft II has an inescapable allure to it. You can feel yourself getting better, making smarter decisions. Put in the time, learn the ropes, and suffer a few crushing defeats and you'll discover an infinitely deep strategy game that teases you with hints of potential mastery. There is perhaps no victory in online gaming that is more gratifying than a StarCraft victory, and the first thing you'll think after winning your first online match is, "I want to do that again. Also, how did I do that?" A StarCraft match is stressful and unrelenting, but it's also absurdly fun if you're out of the weeds and actively attempting to employ your next brilliant strategy.

If you're a player of competitive online games and have yet to try StarCraft, I'd recommend you give it a go, even if only to better understand the core concepts that power the games you love. It's never too late to pay a visit to one of the classic franchises that paved the way for the mega-titles of today. The Starter Edition of the game, which is free, gives you everything you need to get a taste for this pillar of the RTS community. My one and only bit of strategy advice would be to find a friend who knows how to play and have that friend guide you through your opening moments. Being a noob in StarCraft is fun from a curiosity point of view, but your skills won't improve much if you can't figure out what it is you're doing wrong.

After my time with StarCraft II, I understand why people love playing it so much. It's because no matter who you are and how many matches you've played, there's always room to improve. StarCraft provides you with the tools; it's your job to learn how to use them. I won't be trading my many Dota 2 hats for a StarCraft space marine's helmet, but at the very least I'll be tuning in for the WCS Global Finals and perhaps tagging along in some 2v2s in the near and distant future. Maybe I'll finally figure out why everyone's always yelling about pylons.

Massively's not big on scored reviews -- what use are those to ever-changing MMOs? That's why we bring you first impressions, previews, hands-on experiences, and even follow-up impressions for nearly every game we stumble across. First impressions count for a lot, but games evolve, so why shouldn't our opinions?
In this article: activision, blizzard, blizzard-entertainment, esports, featured, GSL, hands-on, matchmaking, noobs, pvp, Real-Time-Strategy, rts, starcraft, starcraft-2, starcraft-ii, warcraft, WCS
All products recommended by Engadget are selected by our editorial team, independent of our parent company. Some of our stories include affiliate links. If you buy something through one of these links, we may earn an affiliate commission.