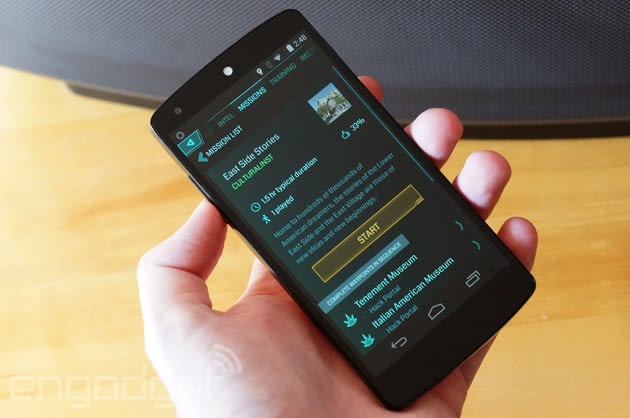 Ingress certainly has a following among augmented reality gamers, but its relative lack of direction can be intimidating -- especially if you're a newcomer. Where do you go first? As of today, you'll (usually) have an easy answer. Google's Niantic Labs has added user-created missions to the game that give you an incentive to get moving. Effectively, they're walking tours with objectives. You're usually asked to hack portals or solve puzzles at each stop, with the promise of special medals at the end. Each mission includes both average completion times and ratings, so you'll likely know in advance whether or not a given adventure is worth the effort.

Not everyone can take advantage of missions just yet. You can only access them on Android right now (iOS is due soon), and only a small batch of "experienced" players can create them; Niantic eventually plans to open up creation to everyone with a level five rank or higher. It could be a while before you see many missions near you, then. Even so, what's here could keep you playing Ingress when you might otherwise have given up -- and you'll probably get some exercise in the process.

Via: The Next Web
Source: Ingress (Google+), Google Play
Coverage: VentureBeat
In this article: android, augmentedreality, games, gaming, google, ingress, mobilepostcross, nianticlabs, smartphone
All products recommended by Engadget are selected by our editorial team, independent of our parent company. Some of our stories include affiliate links. If you buy something through one of these links, we may earn an affiliate commission.