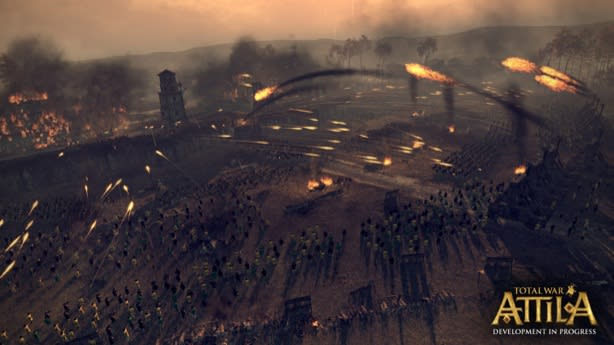 Attila the Hun is the grimacing face and unrelenting antagonist in the next Total War game, coming from Creative Assembly in 2015.

In Total War: Attila, you manage a huge Eastern Roman empire, stretched to breaking point across a vast terrain in Europe and a thin dispersal of military troops. With Atilla and the Hunnic empire threatening to invade, you must strengthen your entrenchment and command your armies to push back his influence – often coming in the form of fiery sieges.


Developer Creative Assembly, having just returned from the cold reaches of outer space, says dynamic fire is one of several major enhancements coming to its strategy series; a sort of flaming red carpet laid out for Mr. The Hun.

Real-time battles are further complicated by civilians and destruction of settlements, while empire management is laid out more clearly in the return of family trees and elaborate skill trees. Total War: Attila also keeps track of your milestones, decisions and misfortunes in a scrolling in-game record. It might not match the folklore to come from Atilla's maneuvers, but at least someone's recording your little spot in history.

Total War: Attila will burn everything on Windows PC and Mac in 2015. Sega has yet to announce the subsequent catchphrase, "That's Totally Atilla," for its post-launch marketing plan.
In this article: 2015, creative-assembly, mac, pc, rts, sega, total-war, total-war-attila
All products recommended by Engadget are selected by our editorial team, independent of our parent company. Some of our stories include affiliate links. If you buy something through one of these links, we may earn an affiliate commission.