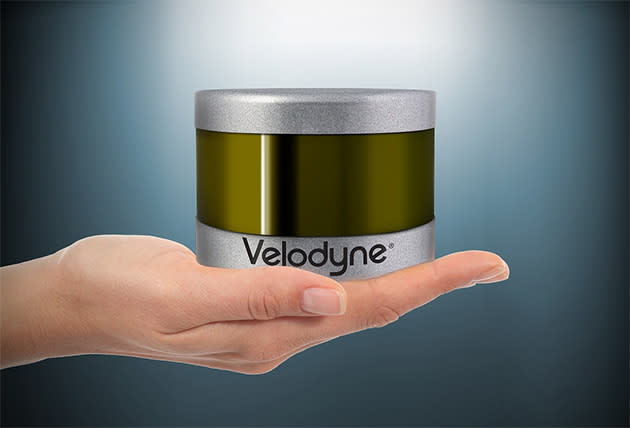 To listen to the Googles and the Elon Musks of the world is to believe that one day soon, we'll be tooting down in the highway in cars that control themselves. Those cars will need eyes, though, and that's where a company called Velodyne Acoustics comes in -- it whipped up the Puck, a scaled down version of the laser scanning tech that helps Google's self-driving cars see (which they also make) that only costs about a tenth of the price. Not up on the market rates for portable LiDAR arrays? Let's put it in perspective: the units Google use cost around $75,000. This new model? Just a shade under $8,000. That old cliché about getting what you pay for still holds true here, though -- this cheapo LiDAR array only has 16 lasers with which it scans the world, down from the 64 seen in higher-end units. As a result we're looking at a pretty staggering dip in the sheer number of environmental data points, but the unit's smaller size and price tag just might mean big things for car companies trying to craft the first truly affordable wave of autonomous cars.

In this article: automotive, cars, culture, gear, google, lidar, robots, self-driving car, TL17LIDR, transportation, velodyne
All products recommended by Engadget are selected by our editorial team, independent of our parent company. Some of our stories include affiliate links. If you buy something through one of these links, we may earn an affiliate commission.