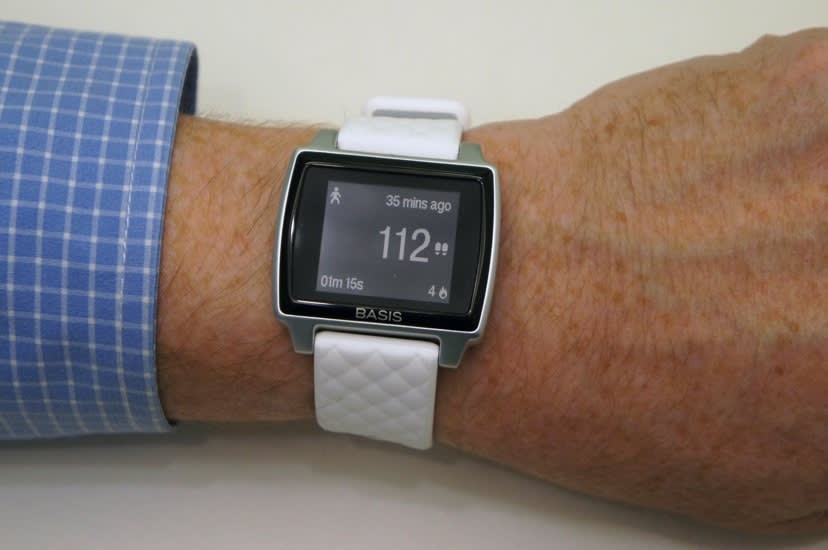 You probably mainly think of Intel as the company trying to make 2-in-1s happen, but lately it's been dabbling in fitness, too. It all started when the chip maker acquired Basis, the creator of what was quite possibly the most sophisticated fitness wearable on the market. Intel promised it'd make it even smarter. Or something. Now, six months later, Basis is introducing the Peak, its first fitness tracker since joining Chipzilla. And it is indeed a bit smarter. Mostly, though, it's just a better-designed device.

Like its predecessor, the B1, the Peak is loaded with sensors capable of tracking your movement, sweat output, heat dissipation, blood flow and heart rate. This time, though, it can also track your heart rate during workouts. If that sounds like a no-brainer feature, CEO Jef Holove says the optical heart rate sensor on the old model produced too much signal noise while in motion. At the same time, an electrical heart rate sensor (the kind used in heart rate-monitoring chest straps) would have had a negative effect on both battery life as well as the size of the device. So that was out of the question. That said, Holove promises that a new optical sensor and an improved algorithm should produce more accurate results.

Additionally, the band now has a Bluetooth LE radio, helping it sync automatically with a brand-new Android and iOS app. This allows the band to behave more like a smartwatch -- sort of. In an interview, Holove said he didn't want users to be annoyed by too many pop-ups, but added that, at the very least, the band would show incoming texts and calls, along with notifications related to fitness tracking (reminders to get up and move, et cetera). Basis also plans to open its API to developers as it considers adding more apps. Really, though, the company is still figuring everything out: Holove says these smartwatch-like features will be added via a software update sometime after the device ships. That leaves Basis time to decide how many notifications is too many.

So that's how the new fitness tracker works. But if you ask us, the real story is how much better it looks. Aside from the fact that the original B1 was on the pricey side, it was also bulky, with various buttons on the side to make up for the fact that there was no touchscreen. It wasn't the sort of device you could wear with just any outfit. In contrast, this new Peak trades a plastic face for a thinner metal body, complete with an LCD touchscreen, and no buttons on the sides. Basis also claims the display is easier to read in sunlight, but we'll be the judge of that when we eventually get one in to review.

Gallery: Basis Peak and the Basis B1 compared | 6 Photos Additionally, the silicone band has a soft feel and a textured design -- one that manages to resemble the metal links on the Pebble Steel, at least from afar. We rather like it, but if you don't, you can swap in any standard 23mm band. As for battery life, Basis is claiming four days -- the same as the last model. Lastly, the device now meets the 5ATM standard for water resistance, which means it can safely withstand pressure equivalent to 50 meters of water (you've also gotta take into account things like diving, or rough water sports).

The watch costs $200, the same as the debut price of the last-gen Carbon Steel Edition, and will hit stores as soon as this week starting this month, with wider availability to follow sometime in November. Additionally, because Basis now has the backing of a big company like Intel, it can ship to more countries, with the UK and Canada being next on the list. The original B1, meanwhile, will go away. If you happen to own that older model, you can still sync with the existing app, though be warned: You won't be able to use the new application, the one designed for the Peak. That's a shame, because the new app has a slicker UI and also shows more information, meaning you don't have to visit the web console as often. You'll probably wanna upgrade eventually, but hey -- it's your money, not ours.

Update: It will be shipping out to retailers starting in October, but it won't be widely available until November.

In this article: basis, basis peak, basispeak, fitness, fitness tracker, FitnessTracker, hands-on, intel, peak
All products recommended by Engadget are selected by our editorial team, independent of our parent company. Some of our stories include affiliate links. If you buy something through one of these links, we may earn an affiliate commission.