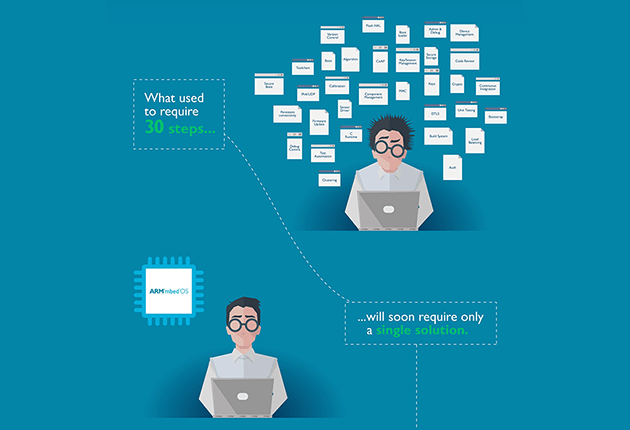 It's the year 2014, and we've yet to have our flying cars and commuter jet packs. But we do have a glimpse of the future with the advent of the "internet of things." It's essentially the idea of connecting everyday objects -- be it thermostats or kitchen appliances -- to the web, in an effort to make our lives easier. As wonderful as that sounds though, development of new IoT technologies can be slow, due in part to the multiple different protocols in existence today and how tiresome it is to create an ecosystem from scratch.

That could soon come to an end, however, thanks to ARM. The chipmaker has just announced a brand new IoT-specific device platform that includes both a free operating system (tailor-made for ARM's Cortex-M processor based devices, of course) plus a server-side software product that ties it all together. Based on the mbed hardware and software ecosystem, the platform basically gives manufacturers the tools and building blocks necessary for IoT devices and services, thus making it that much faster and cheaper for them to bring their ideas to fruition.

The mbed OS, for example, already comes packaged with security, communication and device management features along with built-in support for key standards like Bluetooth Smart, LTE, Wi-Fi and Thread, while the mbed Device Server offers straightforward integration with cloud services. Plus, it's all based on open standards, which could mean different smart gadgets from different manufacturers will finally be able to communicate with one another.

And it's not just limited to the home either. ARM was keen to point out the potential this would have in a city-wide application. Zach Shelby, the director of technical marketing at ARM, says that when implemented with street lights, for example, the technology would be able to detect the number of people that are in certain areas during certain times of day. On its own, that data doesn't mean much, but if collected on a large scale, it could provide valuable data on crowd congestion, street occupancy and how flow in a city works. Another important application area would be with wearables, but not in the realm of an Android Wear device or an Apple Watch -- think more low-power stuff like heart rate sensors and connecting them to cloud so you can easily track your progress with apps.

Of course, ARM is certainly not the first to come up with an IoT platform or operating system. But ARM sees its mbed device platform in a class of its own, because it can work across all devices with a Cortex-M processor, which is pretty ubiquitous (both the Pebble and the Nest, for example, have a Cortex M3), and it provides both the OS and a server-side solution. It certainly benefits those who've already invested in ARM chips and of course it behooves ARM to make the platform open.

While ARM already has plenty of partners signed up, we're told that we likely won't see devices with mbed until some time next year. "The Internet of Things has turned into this fragmented world," says Mike Muller, ARM's CTO. "So we decided we're going to put this out there. We're going to make it free so that it's something that everyone can use."

In this article: arm, deviceplatform, internetofthings, iot, mbed, mbedos
All products recommended by Engadget are selected by our editorial team, independent of our parent company. Some of our stories include affiliate links. If you buy something through one of these links, we may earn an affiliate commission.