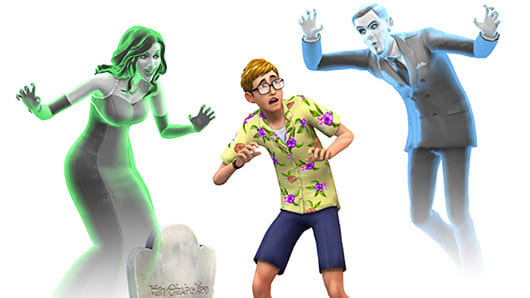 Hoping to appease fans upset that The Sims 4 lacks a number of features that have long been a standard of the series, publisher EA has outlined plans to add a host of new content to the virtual life simulation over the next few months.

In the October update, The Sims 4 will receive costumes based on iconic Star Wars characters, as well as new ghostly forms for your deceased Sims. According to EA, these ghosts will behave much as they did prior to death, but the manner in which they died will grant the apparition wholly new behaviors. Those ghosts will come in handy once the November update arrives, as the mortality rate of your Sims is expected to skyrocket once pools are finally added to The Sims 4. Then, in December, EA and developer Maxis plan to introduce new career paths that are slightly less likely to result in your Sims drowning in the backyard.

There's no word on when exactly these updates might be released, but they will each be free additions, requiring only that players log onto EA's Origin digital distribution service to download each update.
[Image: EA] 15
Source: The Sims
In this article: ea, maxis, patch, pc, pools, star-wars, the-sims-4, update
All products recommended by Engadget are selected by our editorial team, independent of our parent company. Some of our stories include affiliate links. If you buy something through one of these links, we may earn an affiliate commission.