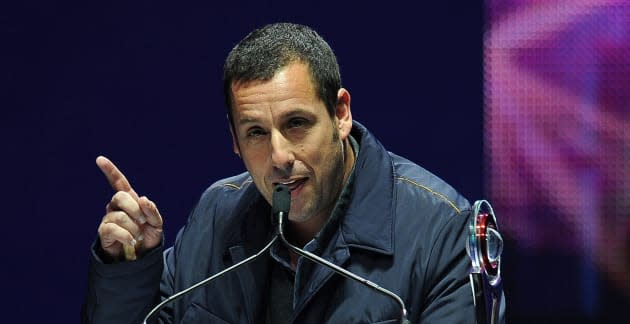 Netflix said it had more movies coming other than the sequel to Crouching Tiger, Hidden Dragon and it's already lining them up, starting with an exclusive four picture deal for Adam Sandler. The comedian's flicks have grossed over $3 billion worldwide, so we'll count it as a win and just forget about Jack & Jill and Blended. According to Sandler, the secret to getting the deal done was because "Netflix rhymes with Wet Chicks." Things are so early on that production meetings are apparently just starting, but Netflix and Sandler's Happy Madison Productions team say the earliest movie could debut in 2015. The deal doesn't cover the actor's current studio commitments, and unlike Crouching Tiger, there's no mention of trying to debut these on the big screen which would probably be a waste of time anyway.

Netflix exec Ted Sarandos says people worldwide love Sandler's movies and watch them again and again, something the company can certainly track with its data and ratings systems. All jokes aside, it could be a good fit -- Sandler has hits from Hotel Transylvania to Grown Ups to The Waterboy, and has executive produced big movies for others. Netflix gave us House of Cards and Orange is the New Black -- we'll wait for the first movie to arrive, and at best, hope for a surprise on the level of Punch Drunk Love. At worst? Sandler is about to join Van Damme and other faded stars on the direct-to-video aka direct-to-streaming shelf.

In this article: adamsandler, amd, hdpostcross, movie, netflix
All products recommended by Engadget are selected by our editorial team, independent of our parent company. Some of our stories include affiliate links. If you buy something through one of these links, we may earn an affiliate commission.