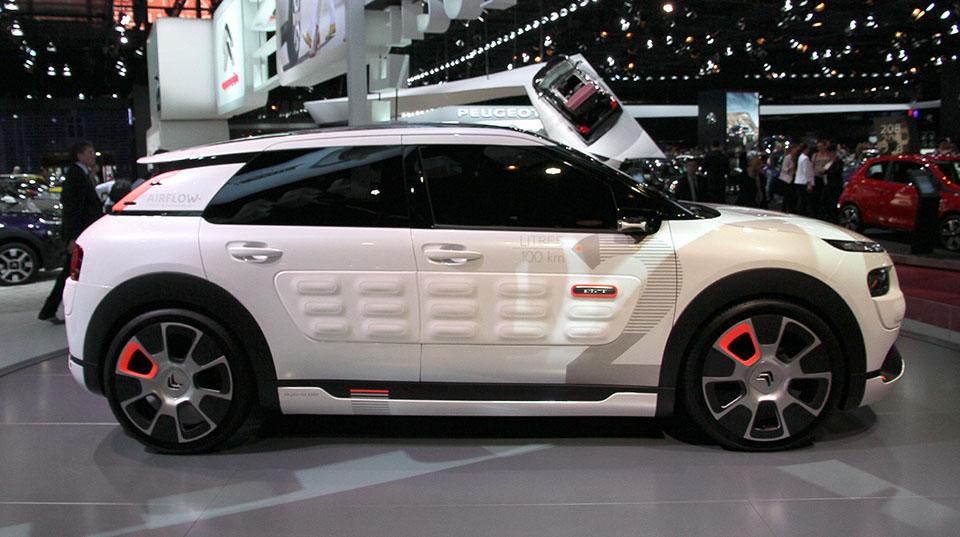 With the Cactus Airflow 2L, Citroen thinks it's found a way to bring the cost of hybrid technology down to earth using nothing but air. Based on a production Cactus model, the natty, low-roofed concept car has a unique hybrid compressed air/gas engine at its core. In a regular hybrid, batteries store energy from braking and coasting downhill. It's the same idea here, but instead of storing electricity, the Airflow 2L compresses air and stocks it in a tank. It can then be released when needed, powering the car during wasteful acceleration or city driving. While that may sound wonky, the system has been tested to an rather astonishing 115 mpg or so. Still, why bother with an untested system when existing hybrid drivetrains are so mature? The main reason is the simplicity, which results in a much cheaper vehicle. For instance, the compressed air tanks are lighter and, of course, cheaper than an equivalent lithium-ion battery. The reduced weight results in better gas mileage, and Citroen has added some other tricks to increase efficiency. Those include composite materials and aluminum to further reduce weight, along with air intakes and a rear spoiler. It even has wheel covers that aerodynamically cover the wheel during cruise, but retract to prevent overheating during braking -- one of those "wow, cool" car show features that rarely make it into production. And mass-producing the vehicle is the point, according to Citroen. It wants to have a hybrid option in its vehicle lineup that costs about the same as diesel engine upgrade -- that is to say, only several thousands of dollars more. That's a steep discount from most hybrid vehicle options -- the Honda Civic hybrid costs up to $8,000 more than the standard model. As for when, and how much, the French car maker was cagey on details, but thinks such a vehicle could arrive to market as early as 2016.

In this article: Airflow2L, Citroen, CompressedAir, Concept, ConceptCar, Hybrid, ParisAutoShow2014
All products recommended by Engadget are selected by our editorial team, independent of our parent company. Some of our stories include affiliate links. If you buy something through one of these links, we may earn an affiliate commission.