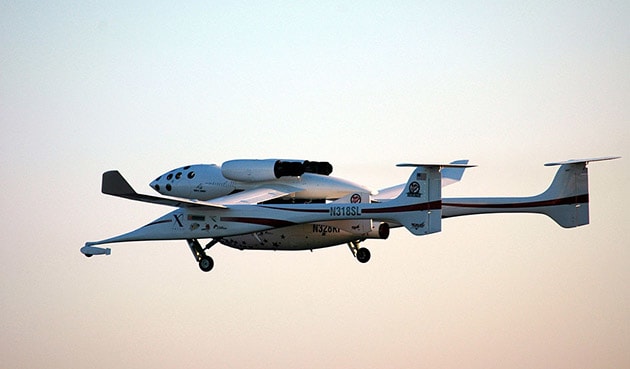 Back in 2004, companies weren't fighting over NASA contracts and nobody was selling tickets for suborbital space flights just yet. The commercial space industry was still in its early stages, and it wasn't until October 4th that year when one of its earliest and biggest victories took place. On this day, a decade ago, SpaceShipOne reached space for the third time, winning the $10 million Ansari X Prize and proving that there's future for privately-funded extraterrestrial endeavors in the process. The first Ansari X Prize challenged teams worldwide to build a reusable spacecraft that can carry up to three people to the boundary of space, or 62 miles above sea level. SpaceShipOne, the 28-foot-long vehicle created by Mojave Aerospace Ventures (backed by Microsoft co-founder Paul Allen), flew half a mile higher than the minimum in June that year and repeated the feat two more times.

According to George Whitesides, CEO of Virgin Galactic, the event was truly monumental, because:

It showed that a small, nongovernment team could carry off a major human spaceflight program. And that was a really important existence proof for a lot of the work that has come in those intervening years.

If you're wondering what happened to SpaceShipOne in the end, well, you'll be happy to know that it didn't go to waste -- Sir Richard Branson licensed its technology and used it as the foundation on which to build Virgin Galactic. In fact, it led to the development of VG's SpaceShipTwo, which could take Justin Bieber, Lady Gaga and anyone willing to pay 250 grand to the edge of space as soon as 2015.

Source: Space
In this article: Ansari, CommercialSpaceTravel, space, SpaceShipOne, SpaceShipTwo, VirginGalactic, XPrize
All products recommended by Engadget are selected by our editorial team, independent of our parent company. Some of our stories include affiliate links. If you buy something through one of these links, we may earn an affiliate commission.