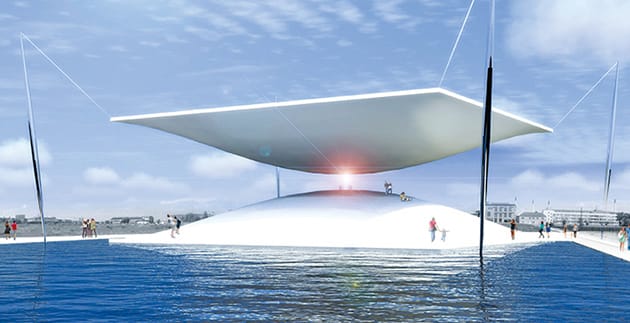 Japan is the birthplace of high-speed rail, and it continues to be a leader train travel -- officials just unveiled the nation's new magnetic-levitation train to the public for the first time! The new train can hit speeds of up to 311 MPH using "L-Zero" technology, and it will be able to zip passengers from Tokyo to Nagoya in just 40 minutes. In other transportation news, Tesla is gearing up to unveil something big this week -- Elon Musk recently tweeted a mysterious photo of the upcoming project, although we'll have to wait until Thursday for the full details. China's Foxconn may be best known as the manufacturer of Apple products, however the company is getting ready to throw its hat into the EV ring with a $15,000 electric car. And Spanish firm Opbrid is aiming to revolutionize public transportation with a new system that can recharge an entire electric bus in five to eight minutes flat.

Copenhagen is one of Europe's major design capitals, and the Danish city soon could boast one of the world's most ingenious renewable energy plants. Argentine designer Santiago Muros Cortés just won the 2014 Land Art Generator Initiative design competition with his proposal for a gigantic solar energy-generating hourglass that could produce enough electricity for 1,000 Danish homes. In other green energy news, Burlington, Vermont, is now powered by 100 percent renewable energy. The city of 42,000 gets its electricity from a combination of hydro, wind and a biomass facility. Solar farms are great, but they take up a lot of space. That's why the folks at Ciel et Terre just installed the UK's first floating solar farm in Berkshire. The array features 800 photovoltaic panels and has a capacity of 200kW. New York City Mayor Bill de Blasio recently announced plans to install solar panels on 24 public schools by 2016. The solar schools are part of a larger plan to install 100 megawatts of solar power on 300 public buildings over the next decade. And with ski season just a couple months away, snowboard maker Signal just launched a solar snowboard that charges your electronic devices as you cruise down the mountain.

Sydney is now home to the world's tallest vertical garden, and it's a sight to behold. The 550-foot building was designed by architect Jean Nouvel and French botanist Patrick Blanc, and it features 250 species of native Australian flowers and plants. In other green architecture news, North America's largest green wall is now complete in Vancouver. An amazing time-lapse video shows the installation of the 10,150-square-foot, double-sided green wall. Urban development is responsible for many environmental changes, ranging from water pollution to the urban heat island effect. But is it possible for urban design to cause tornadoes? A new report published in a Turkish newspaper blames Istanbul's rapid urbanization for a series of "freak mini-tornadoes" that recently hit the city. Beehives have long served as inspiration to designers, and the UK Pavilion at the 2015 Milan Expo will bring awareness to the plight of vanishing bees with a virtual beehive made of a fine steel lattice and LEDs.

It's early October and Halloween is coming up fast -- do you know what you're going to be? If you're at a loss, fear not -- we've got lots of great DIY costume ideas! You can play out the iPhone/Android debate by masquerading as your phone of choice, or you can bring your favorite game to life by dressing as a Minecraft character, Tetris blocks or a Rubik's Cube. Robot costumes are also a tried-and-true favorite, or you can get more elaborate with a DIY R2D2 getup. Best of all, most of these costumes can be assembled with cardboard boxes and materials you have lying around the house!

In this article: eco-friendly, energy, environment, green, inhabitat, solar, thisweekingreen, transportation
All products recommended by Engadget are selected by our editorial team, independent of our parent company. Some of our stories include affiliate links. If you buy something through one of these links, we may earn an affiliate commission.