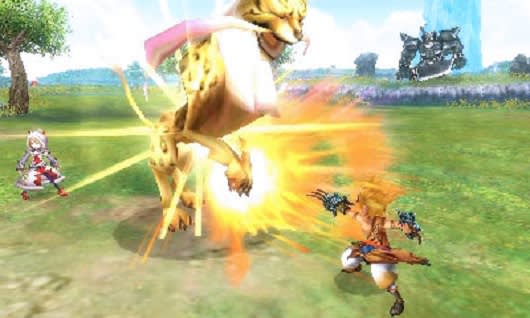 Final Fantasy Explorers will not use the 3DS' stereoscopic 3D functions, Siliconera reported. The game will make use of the new 3DS and 3DS XL's buttons and C-stick, however, controlling the third-person game's targeting and lock-on mechanics. It will also be compatible with the Circle Pad Pro, unlike a certain popular Nintendo-published fighting game that launched recently.

Square Enix isn't the first publisher to dismiss the handheld system's 3D capabilities to some degree; Nintendo's own Pokemon X and Y limited their use of the stereoscopic 3D visuals to the game's battles. The console manufacturer even launched an entire version of the system without the 3D functions roughly one year ago, the Nintendo 2DS. Final Fantasy Explorers will launch on December 18 in Japan. While both US and European trademarks exist for the game, it hasn't yet been given a release date elsewhere.
[Image: Square Enix] 12
Source: Siliconera
In this article: 3d, 3ds, c-stick, circle-pad-pro, final-fantasy, final-fantasy-explorers, new-3ds, new-3ds-xl, nintendo, Square-Enix, stereoscopic, stereoscopic-3d
All products recommended by Engadget are selected by our editorial team, independent of our parent company. Some of our stories include affiliate links. If you buy something through one of these links, we may earn an affiliate commission.