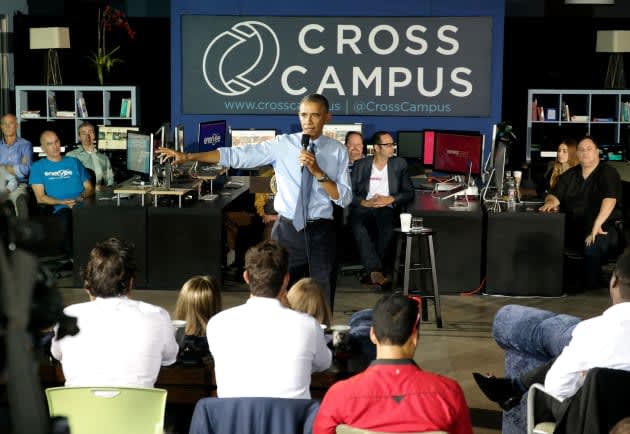 President Obama found a place in the heart of many techies during his first campaign thanks to his staunch support of net neutrality. Six years later the debate still rages on, but Obama's position hasn't changed. During a Q&A in California on Thursday the President reiterated his support for the principle saying:

"I made a commitment very early on that I am unequivocally committed to Net Neutrality... Tom Wheeler, knows my position. I can't-now that he's there-I can't just call him up and tell him exactly what to do. But what I've been clear about, what the White House has been clear about, is that we expect that whatever final rules to emerge, to make sure that we're not creating two or three or four tiers of Internet."

That statement seems to stand in opposition to the current proposal sitting in front of the FCC which leaves plenty of wiggle room and loopholes for creating tiered service. Of course, he stopped shy of calling for broadband to be reclassified as a Title II service, which critics have said is essential for preserving true net neutrality. Reclassifying broadband under Title II would allow the FCC to regulate it as a "common carrier" like telephone lines, and would demand that ISPs act in "the public interest."

[Photo courtesy of Getty, taken by Kevin Mazur for WireImage]

In this article: Barack Obama, fcc, government, Net Neutrality, regulation, title ii, tom wheeler
All products recommended by Engadget are selected by our editorial team, independent of our parent company. Some of our stories include affiliate links. If you buy something through one of these links, we may earn an affiliate commission.