iPhone 4S arriving in Hong Kong, South Korea and a number of other locales on November 11th 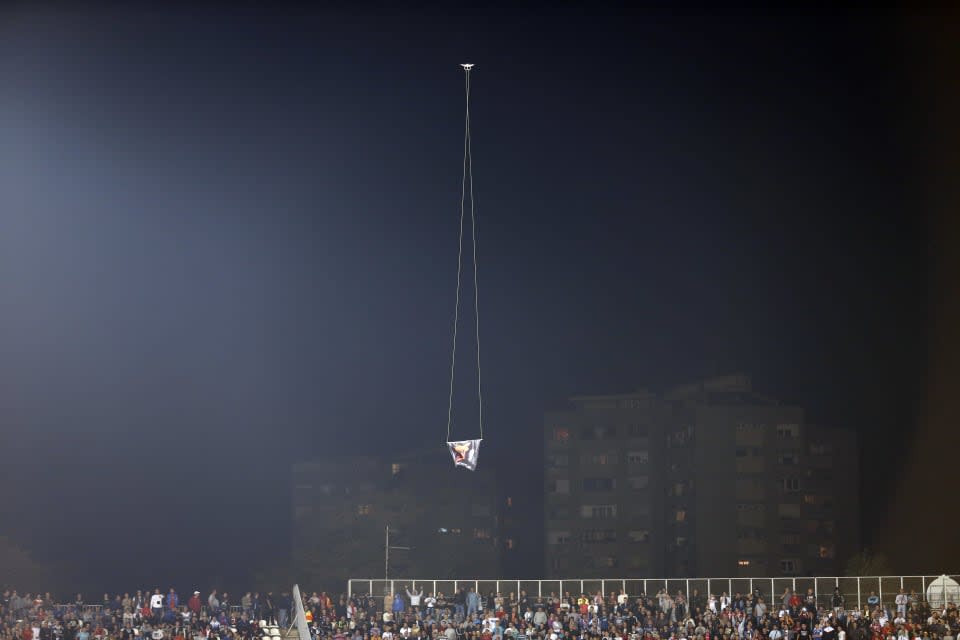 A Euro 2016 qualifying game between Serbia and Albania was suspended yesterday, after a drone flew over the pitch carrying a flag with a pro-Albanian message. The match was being played at the Partizan Stadium in Belgrade, Serbia, ahead of UEFA's (the governing body of European football) most important country competition in 2016, set to be hosted by France. Political problems for Serbia and Albania began many years ago, but the situation worsened right around the time Kosovo, a Serbian province populated mostly by Albanians, declared independence in 2008, which to this day isn't recognized by Serbia. For reference, roughly a third of the Albania squad members are from the Kosovo region alone, making them all too familiar with the hostile relationship between the two Balkan nations. Even before the match began, and soon after being scheduled for play, tensions were expected to be so high that Albanian supporters weren't allowed inside, an effort by UEFA and local authorities to minimize the chances of any type of chaos erupting. And everything was okay until around the 40th minute of play, when a drone showed up at field-level displaying a controversial flag, which was subsequently grabbed and pulled down by Serbian player Stefan Mitrović. Suddenly, what everyone was trying to avoid, had taken place: turmoil. Moments later, as Albanian players tried to protect the flag, players were fighting each other; Serbian supporters invaded the field, with anything but good intentions; the game was eventually abandoned by the referee; and the away team had to be escorted out of the pitch and into the locker rooms.

Once the match was over, police began searching the Albanian team in hopes of finding the remote controlling the UAV, but nothing came of it. Let's just hope things don't take a similar turn next time -- Serbia is scheduled to visit Albania for another Euro 2016 Qualifier match, currently expected to be played on October 8th, 2015.

[Image credits: Associated Press]
In this article: Albania, Drone, Drones, Euro 2016, Football, Serbia, Soccer, Sports, UAV, UAVs
All products recommended by Engadget are selected by our editorial team, independent of our parent company. Some of our stories include affiliate links. If you buy something through one of these links, we may earn an affiliate commission.