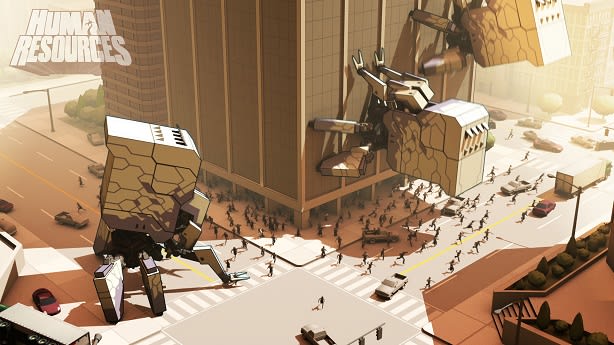 Planetary Annihilation developer Uber Entertainment canceled its Kickstarter campaign for Human Resources, the developer's human-harvesting, apocalyptic real-time strategy game. "Every Kickstarter prediction model is showing that we will come up woefully short of our goal," the developer wrote in an update on its funding page, adding that it can't continue spending time and money on a project that won't get funded. "One thing is for sure, Human Resources, as pitched in this Kickstarter, is over. But we adore the world of Human Resources and will endeavor to do what we can to bring it to life in some form."

The developer raised $384,358 of its $1.4 million goal on the funding platform. The lofty goal would have been difficult for any aspiring developer to overcome; just four of the 341 Kickstarter games tracked in our one-year Crowdfund Bookie research series earned that much money in their campaigns. Even the $844,127 hauled in by Harmonix for Amplitude in May was an anomaly in a funding space that scarcely supports big-budget projects like it once did. Human Resources was planned to end in two weeks on Tuesday, November 4.
[Image: Uber Entertainment]
Source: Kickstarter
In this article: cancel, canceled, CrowdFunding, human-resources, Indie, kickstarter, pc, planetary-annihilation, real-time-strategy, RTS, strategy, uber-entertainment
All products recommended by Engadget are selected by our editorial team, independent of our parent company. Some of our stories include affiliate links. If you buy something through one of these links, we may earn an affiliate commission.