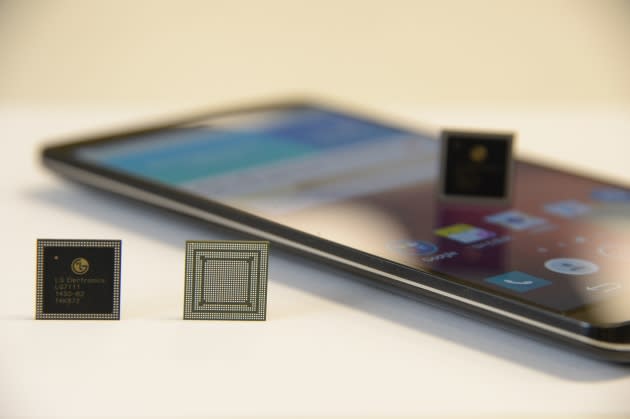 LG has been trying for years to catch up to Samsung and Apple in phone sales, and its next step on that path is to make a device with an LG CPU inside. The G3 Screen phone that it's releasing this week in Korea will have an eight-core "NUCLUN" (pronounced NOO-klun) processor, based off of an ARM big.LITTLE design similar to Samsung's octacore Exynos chips. NUCLUN has four 1.5GHz cores for the tough tasks, and four 1.2GHz cores for easier stuff that help it save on battery life. Otherwise, there's also a 5.9-inch 1080p screen and support for the new, faster LTE-A networks that download at up to 225Mbps. Until now, LG's phones have mostly relied on Qualcomm chips for their processing needs, but Dr. Jong-seok Park believes going its own way will help the company "achieve better vertical integration" and greater flexibility going forward. Of course, we're wondering when a NUCLUN-powered phone will go on sale outside of Korea, but considering the progression of Exynos, that could take a while.

Source: LG Newsroom
In this article: android, arm, g2, g3, G3 Screen, lg, LG G3, mobilepostcross, nuclun, octacore, video
All products recommended by Engadget are selected by our editorial team, independent of our parent company. Some of our stories include affiliate links. If you buy something through one of these links, we may earn an affiliate commission.