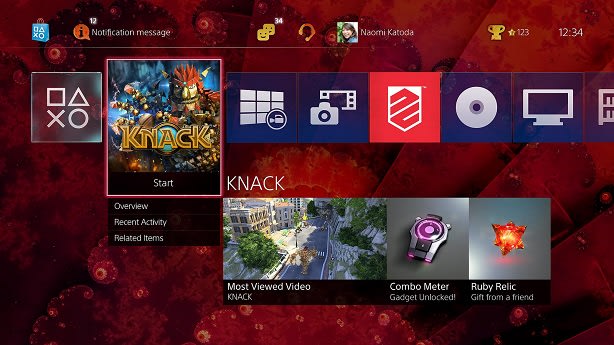 The PlayStation 4's version 2.0 system update will arrive next Tuesday, October 28, PlayStation announced via Twitter. Codenamed "Masamune," the update adds the ability to play music from a USB stick connected to the console. As revealed earlier this month, it also features more game broadcast tools, such as the ability to archive sessions and search for specific games being broadcast, as well as themes to spice up the system's layout.

One of the major features being added to the console next week is Share Play, the pass-the-controller-style cooperative multiplayer game sharing mode announced by Sony at its Gamescom 2014 event in August. Though limited to one-hour increments, the feature will be inherent to all PS4 games, allowing PS Plus members to let a friend take over a game the latter doesn't own via PSN. The Masamune update also adds a dedicated YouTube app as well as improved game library filtering options.
[Image: Sony]
Source: Twitter
In this article: firmware-update, masamune, playstation, ps4, ps4-themes, scea, share-play, sony, system-update, themes, update, youtube
All products recommended by Engadget are selected by our editorial team, independent of our parent company. Some of our stories include affiliate links. If you buy something through one of these links, we may earn an affiliate commission.