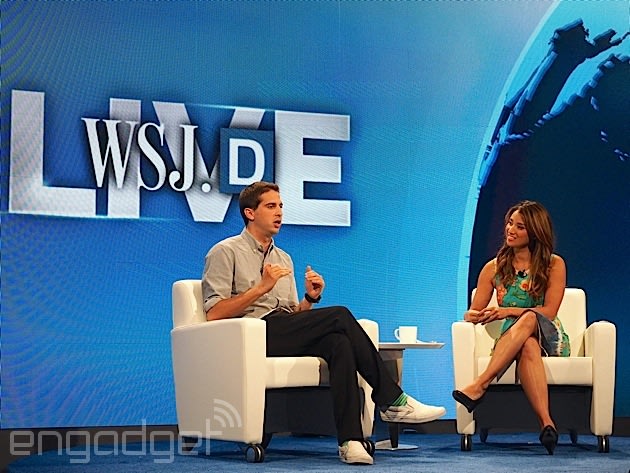 While on stage at the WSJD Live conference, Whisper CEO Michael Heyward defended his company against the Guardian's recent allegations that the anonymous sharing app stores and tracks its users locations. He told Wall Street Journal reporter Evelyn Rusli that not only were all the paper's accusations wrong and misleading, but that he would fire the employee who supposedly told the Guardian that it would follow a particular Whisper user, who happens to be a lobbyist, for life. The company has already suspended its editorial staff to conduct an internal investigation and find out just who this person is. "This does not reflect our values and what we're all about," he said.

Heyward further said that the Guardian, who was one of Whisper's media partners, came into the Whisper's office "under false pretenses" and "made a lot of technical inferences from non-technical people." Particularly, he said that Whisper can't track GPS locations, though he does admit to collecting IP addresses that it deletes after seven days. "We use them for community safety purposes," he said, adding that the company's privacy policy has not changed despite what the Guardian has reported.

As for the accusation that it shares certain Whisper posts with the US Department of Defense, Heyward said a lot of anonymous posts come from military personnel who exhibit post-traumatic stress disorder. The company then collected that data -- which are all publicly posted anyway -- and compiled them in a study that the company shared with the office of Veteran Affairs. "To take that and misconstrue that as sharing user data for surveillance... it's just misleading," said Heyward. Another case in which Whisper does share user posts is any time a minor is at risk. "We'll always proactively alert child protective services," said Heyward. Apparently Whisper does this about 20 times per week. It also does this if someone posts a suicidal note or is a danger to themselves and others.

As for whether Whisper would take legal action against the Guardian, Heyward wouldn't give a concrete answer, but he did hint that it was a strong possibility. "The way the Guardian mischaracterized and misled their readers was hugely responsible," he said. "We have to focus on doing right for our users and our company."

In this article: mobilepostcross, whisper, wsjdlive
All products recommended by Engadget are selected by our editorial team, independent of our parent company. Some of our stories include affiliate links. If you buy something through one of these links, we may earn an affiliate commission.