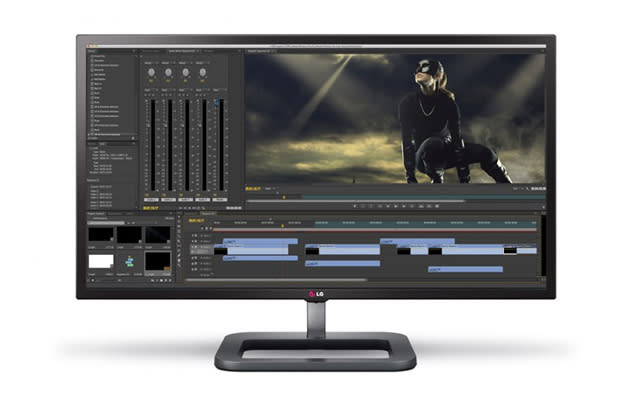 If your 4K project will be beamed onto millions of TVs or movie screens, "close enough" color accuracy won't cut it. LG wants to help with the 31MU97 Display Cinema 4K monitor, a 31-inch, 4,096 x 2,160, 19 x 10 ratio display with 10-bit color that can cover 99.5 percent of the AdobeRGB spectrum. That'll work well for photographers, but it'll also suit moviemakers thanks to the Dual Color Space mode. When switched, it'll reproduce 97 percent of the "DCI-P3" color space used by filmmakers to grade digital cinema camera footage. It will also work on a PC or Mac, thanks to Thunderbolt DisplayPort support. Such displays can run breathtaking sums, but the 31MU97 looks more reasonable -- it's listed on LG's Australian site at $2,499 Australian dollars (update: it's $1,399 in the US). It'll hit stores this week in the US, Germany, the UK and Australia, followed by other parts of the world in November.

Update: The US price will actually be $1,399, which -- if it lives up to LG's specs -- will make it a serious contender for a lot of graphics and video pros. LG also told us that, despite what it's Australian site says, it will not support Thunderbolt. Instead, Mac users will connect using a Displayport cable (an adapter is included), which will support 4K, 10-bit resolution.

In this article: 10-bit, 4K, DigitalCinema4KMonitor, lg, LG 31MU97
All products recommended by Engadget are selected by our editorial team, independent of our parent company. Some of our stories include affiliate links. If you buy something through one of these links, we may earn an affiliate commission.