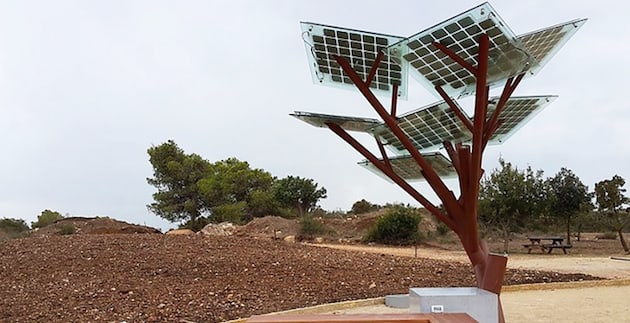 It would be an understatement to say that Tesla Motors has disrupted the electric car market, and other carmakers have taken note of their success. Ford just revealed that it is considering building a similar long-range electric car that would rival the Model S's 265-mile range. (Ford's only fully electric car, the Ford Focus Electric, has a range of just 76 miles.) In other automotive news, Detroit Electric has revealed the final exterior design of the SP:01, its electric two-seater sports car. When the car goes on sale next year, it will be the world's fastest production electric sports car with a 0-60MPH time of just 3.7 seconds and a top speed of 155MPH.

What do you get when you combine 3D printing with crowdsourced design? An enormous egg-shaped sculpture that just happens to be the largest 3D-printed collaborative community art project in the world. The 20-foot-tall sculpture, which was recently unveiled during Dutch Design Week, is made up of 4,760 uniquely shaped stones. Shipping containers continue to be the current object of architects' fancy, largely because of their practicality and affordability. In Johannesburg, Architects of Justice was commissioned to design a library, but when the money ran out, it switched gears and built a colorful structure made from shipping containers. In Cairo, Vincent Callebaut Architecture recently drew up plans for a large set of undulating buildings that are inspired by the structure of coral reefs. The roofs of these futuristic buildings will be covered with wind-catchers that will direct airflow through the buildings. And on the residential architecture front, the Boulder, Colorado-based studio Renée del Gaudio Architecture designed the Canyon House, a gorgeous solar-powered house that references the architecture of the area's mining and farming heritage.

We've seen 3D-printed body parts, cars and even houses, and now a computer scientist has invented 3D-printed gardens that can grow in any shape. Yuichiro Takeuchi recently figured out a way to design, print and grow herb and flower gardens in nearly any desired shape. In other tech news, a teen in New York City invented a wearable sensor that can help keep Alzheimer's patients safe. The SafeWanderer can keep tabs on patients if they begin to wander off, and it can notify a caregiver via a smartphone app when a patient is on the go.

Scotland has quickly emerged as one of the world's biggest producers of offshore wind energy, and the country could also soon become a major player in tidal power. The company MeyGen recently announced plans to build the world's largest tidal power plant in Pentland Firth, a sound on the Scottish coast with tides that can reach up to 18MPH. In other clean energy news, a massive former cigarette plant in Concord, North Carolina, is being transformed into a facility that makes batteries for solar and wind farms. The new plant is expected to employ 2,500 people over the next three years. Aviation giant Boeing is partnering with Commercial Aircraft Corporation of China to produce vegetable-based biofuel in what's being called the China-U.S. Aviation Biofuel Project. The plant, which officially opened last week, will remove contaminates from used cooking oil to turn it into aviation fuel. And the Israel-based company Sologic is looking to bring solar energy to the public sphere with the eTree, a life-size, tree-shaped solar charging station.

In this article: eco, environment, green, inhabitat, thisweekingreen
All products recommended by Engadget are selected by our editorial team, independent of our parent company. Some of our stories include affiliate links. If you buy something through one of these links, we may earn an affiliate commission.