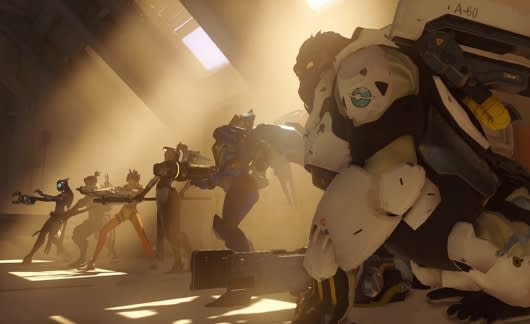 Blizzard announced its newest game today at BlizzCon -- and it might just make you forget all about Titan. The game is Overwatch, a superhero-themed "team-based multiplayer shooter" that is very reminiscent of Team Fortress 2.

The studio revealed the new title with a pair of trailers, one giving a Pixar-esque introduction to the world and the other showing off in-game footage. Blizzard said that Overwatch will be "very approachable" for audiences.

So when is Overwatch coming out? "It is nearer than you think," teased Chris Metzen, following that with news that the beta is coming in 2015 and the title will be playable at this week's convention.

[Update: We've got the trailers now!]

Source: BlizzCon stream
Coverage: Blizzard
In this article: blizzard, blizzard-entertainment, blizzcon, blizzcon-2014, con, convention, event-coverage, gallery, massively-event-coverage, mmofps, multiplayer-shooter, new-title, overwatch, project-titan, screenshots, slideshow, super-hero, superhero, team-fortress-2, titan
All products recommended by Engadget are selected by our editorial team, independent of our parent company. Some of our stories include affiliate links. If you buy something through one of these links, we may earn an affiliate commission.