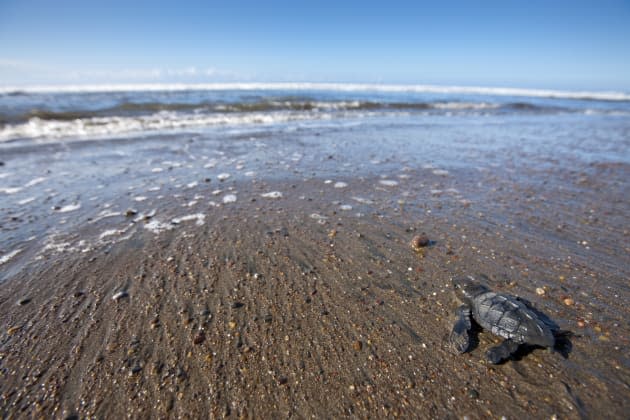 Like any creature that loves beautiful landscapes and the Wolfpack, Sea Turtles like to hang out in North Carolina. The endangered species is a big fan of the state's beaches, where it digs down several feet and lays its eggs ready for hatching. When ready, the turtles take a few days to dig themselves to the surface before waddling back into the sea, but biologists can only pinpoint that down to a six week window. That means that there's six weeks of tourist season when NC's beaches aren't available to use, since no-one wants to see a baby turtle getting squashed by an ATV or kicked by a curious child.

That's where Nerds Without Borders comes in, an organization of, er, nerds, that developed a probe that can be buried by the turtle nest. Equipped with a basic motion sensor and connected to a smartphone module, the probe then sends back the seismic information to HQ. This way, it's only when the hardware detects that the turtles are crawling towards the surface that the beaches are shut down. Not only is it now possible to keep the beaches open when they would have otherwise been closed, but it's also keeping the turtles safe and giving scientists a great chance to see the creatures in action. The team at Nerds Without Borders are now hoping to build a more professional-looking version of the hardware in the hope that the US Fish and Wildlife service will adopt it nationwide.

In this article: Environment, Nerds Without Borders, North Carolina, Sea Turtles, video
All products recommended by Engadget are selected by our editorial team, independent of our parent company. Some of our stories include affiliate links. If you buy something through one of these links, we may earn an affiliate commission.