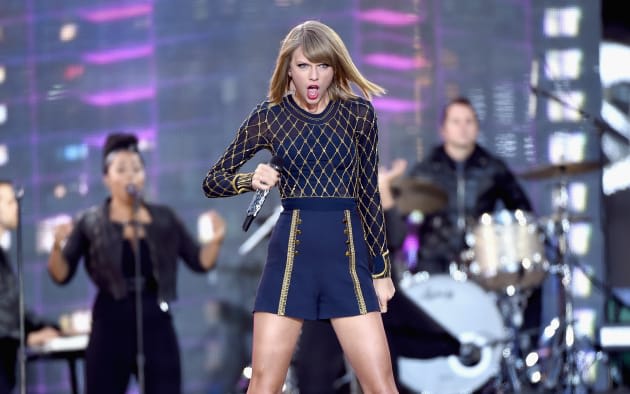 Taylor's camp is snapping its figurative fingers at Spotify CEO Daniel Ek, while uttering "Oh no, you did not!" for saying that the superstar was on track to earn over $6 million from the streaming service within the next year, if she didn't pull her catalog. According to Big Machine (Swift's label) CEO Scott Borchetta, Taylor's music earned only $496,044 in the past 12 months from domestic Spotify streaming. Thus, he's finding Ek's statement hard to believe, especially since Taylor apparently earned more from her Vevo videos within the same timeframe. The songstress did get $2 million overall from global streaming, at least that's what a spokesperson from Ek's company told Time, but we're guessing that's not enough to convince Borchetta that they're potentially getting a $6 million payout this year.

The more we grow, the more we pay artists, and we're growing like crazy. Our users, both free and paid, have grown by more than 50 percent in the last year, which means that the run rate for artists of every level of popularity keeps climbing. And Taylor just put out a great record, so her popularity has grown too. We paid Taylor's label and publisher roughly half a million dollars in the month before she took her catalog down-without even having 1989 on our service-and that was only going to go up.

Looks like the dispute between the two camps is far from blowing over. But considering 1989 has sold 1.3 million during its first week out, we doubt Swift and her team are missing those Spotify checks at all.

Update: According to Rolling Stone, Swift's Big Machine label mates are pulling their most recent efforts from Spotify, too. Jason Aldean had already made the move, and now Justin Moore and Brantley Gilbert have done the same. Aldean's Old Boots, New Dirt nabbed 3 million streams the first week it was out before getting nixed on the service, but the rest of his catalog remains available. The same applies to both Moore and Gilbert: old stuff is there, but the latest has been removed save for the lead singles.

Via: Billboard
Source: Time
In this article: music, MusicStreaming, spotify, streaming, TaylorSwift
All products recommended by Engadget are selected by our editorial team, independent of our parent company. Some of our stories include affiliate links. If you buy something through one of these links, we may earn an affiliate commission.