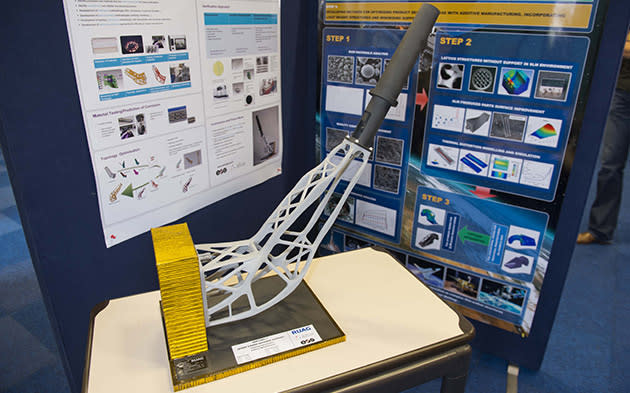 The ISS will soon serve as home to not one, but two 3D printers, courtesy of the European Space Agency. It's a small cube that measures 10 inches on all sides, and it's slated to reach orbit in the first half of 2015 to coincide with Italian astronaut Samantha Cristoforetti's ISS expedition. The device, called Portable On-Board Printer or POP3D, was developed by Italy's ASI space agency to require very little power while creating objects through a heat-based process -- a technology different from what NASA's device uses. Aboard the ISS, it will be printing out biodegradable plastic components (it's unclear what those parts will be at this point), which will then be sent back to Earth for comparison against similar ones printed on the ground.

Both NASA and the ESA are testing out these 3D printers in low Earth orbit, in order to see if they can feasibly produce equipment and parts needed for experiments and repairs. In the future, 3D printing could save space agencies money, as astronauts could just print out whatever they need on the space station itself, instead of asking the ground crew to send things over aboard an unmanned vessel.

In this article: 3D, 3dPrinter, ESA, InternationalSpaceStation, iss, nasa, printer, space
All products recommended by Engadget are selected by our editorial team, independent of our parent company. Some of our stories include affiliate links. If you buy something through one of these links, we may earn an affiliate commission.