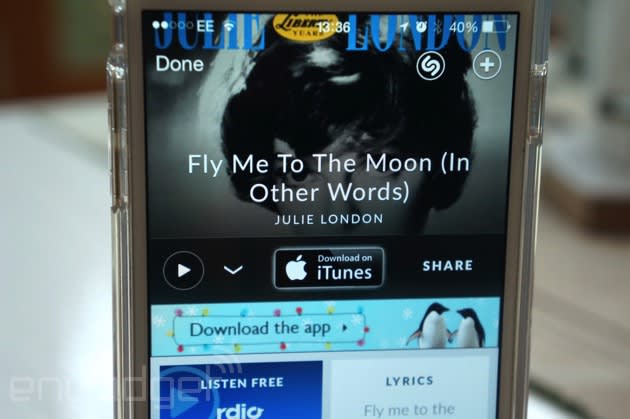 With just over a month until Christmas, brands are firing up their festive marketing campaigns to extract as much money as they can out of consumers. It looked as if John Lewis had the 2014 ad title all sewn up when Monty the penguin first waddled onto our TV screens, but responses, from Sainsbury's in particular, have made it far from a forgone conclusion. In times gone by, John Lewis would just take out newspaper ads or takeover a billboard to keep its campaign at the forefront of the public's mind, but this year it's utilising a clever, mobile first, strategy.

Recognising that many smartphone owners will take out their device to identify a particular song used in an advert, John Lewis has begun displaying ads in music discovery app Shazam to effectively hijack rival campaigns. As Brand Republic points out, the ad, which features a link to the retailer's Monty-themed app, is highlighted when users Shazam Julie London's Fly Me to the Moon, as used by Marks & Spencer, and Paul McCartney and the Frog Chorus's We all Stand Together, which features in Debenhams' festive campaign. John Lewis' banners also appear against the track it uses for its own ad, Real Love by Tom Odell.

As Shazam VP Miles Lewis (who incidentally has no connection to John Lewis) points out, rival retailers may have missed a trick by not securing the ad placements against their TV spots. "The debate we're having with agencies and clients is – you've spent all this time on SEO perfecting and protecting your brand but now there's this new frontier," he told Marketing. "Audio IP is a new development, and some agencies and clients see this as an opportunity. Why would you let a rival brand buy that?" Shazam shows ads in the free versions of its apps, but those who have paid for the company's ad-free Encore app won't have noticed the Christmas ad war unfolding in front of them.

According to Lewis, the Marks & Spencer ad has been "Shazamed" over 2,500 since its release, while Monty has gathered more than 20,000 tags. It's actually allowed John Lewis to exact revenge on Marks & Spencer, after it was on the receiving end of a similar manoeuvre for a Christmas ad in 2012: those searching for Gabrielle Aplin's Power of Love got a face full of M&S ads.

Update: Brand Republic has since published a follow-up report stating that John Lewis is now actively stopping its ads from appearing against Marks & Spencer and Debenhams Christmas tracks. The article notes that John Lewis' positioning was simply a coincidence and may have appeared against the tracks as they rose in popularity. In our tests, John Lewis banners were shown first on three different devices -- make of that what you will.

Source: Brand Republic
In this article: ad, christmas, john lewis, marks and spencer, music, shazam, uk-feature
All products recommended by Engadget are selected by our editorial team, independent of our parent company. Some of our stories include affiliate links. If you buy something through one of these links, we may earn an affiliate commission.