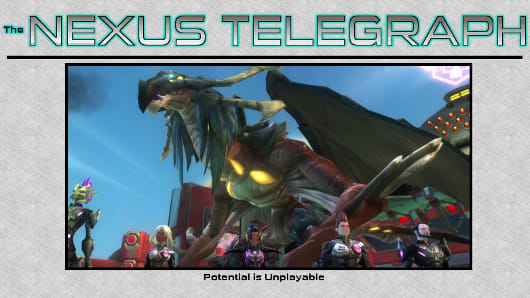 Very few people are going to contest that scaling WildStar's biggest raid down to 20 people is a good move. Some will, yes, but when 400 players are working on content five months after release, that's a good sign that it's not doing the most basic job of getting people to play it. Bringing Datascape's size down is an indisputable good thing.

The question, of course, isn't about that. It's about whether it's too small a change too late in the game.

Make no mistake, this is a change that is significant enough to merit an announcement, but it's one that just missed the big patch we finally received not too long ago. (My initial reaction to that is middling, for the record, neither bad nor really a break from form or something that justifies its long delay.) I would be surprised if we see this change actually live in the game before next year. And it's a change of more conceptual significance than anything else because unless someone very quietly managed to clear Datascape without telling anyone, the end of that raid has gone unseen.

Let's be frank, here: There's not a single listed reason for removing the 40-person option that was not clear and evident before the game's launch. Leading up to launch, there was plenty of commentary from many testers and onlookers, including me, that this raid game was not a good thing and was in fact actively detrimental to the game as a whole. The fact that combat works better with fewer people, the fact that it's hard to get a whole lot of people together, the reality of server loads -- none of this needed launch to become clear.

Moreover, this was content that didn't even mirror the construction of World of Warcraft's ancient 40-person raids. Instead of being content that required 10 competent players and 30 live bodies, it was tuned to give hardcore raiders a challenge even in their full numbers, when it was already a huge challenge getting people attuned and through the prior raid. This was never a good plan, and the fact that it made it through development alone is a huge black mark against the title.

The question is whether or not realizing it now matters because, to start with, Warlords of Draenor is finally out.

As I've argued, Warlords of Draenor is not very good. It's an unambitious expansion that has removed a lot of what made Mists of Pandaria tolerable, despite the fact that the game lacked anything beyond a raiding endgame. (Yes, LFR lacks much of anything in the way of challenge, but it's still raiding.) About the one positive thing you can say about it is that it probably does raiding right, since that's its focus in terms of development. This means that most of the people who want to get into hardcore raiding are going there because that's where the raids are.

That's where the people are.

Trying to take on World of Warcraft in the raiding arena is never a good idea, a rule backed up by the fact that other games competing head-on with an expansion such as Warhammer Online opted instead for different endgame structures -- something to hopefully attract players dissatisfied with the state of the much bigger MMO.

Perhaps on some level that's what WildStar's developers genuinely thought they were doing, ignoring the huge amount of feedback to the contrary and the number of people more concerned with the idea of "play how you want" than "hardcore hardcore hardcore." The reduction in raid size comes more than five months after launch, and for better or worse -- mostly worse -- the game has already made its impression on the public consciousness. It's a game that wants desperately to be hardcore, and all that talk about playing how you want was just that -- talk.

Courting the raid crowd was always a bad idea. It's a worse idea now, when a huge number of guilds have already been defeated by the roster boss and the attunement boss. And it's even worse when you consider that unlike, say, five months ago, now we have a new expansion for the most popular MMO on the market that promises it has learned some of the lessons that were publicly available over the past seven years regarding raid design. This was always going to be a rough fight for WildStar.

Lowering the raid size now won't re-attract the raiders who left in anger before, and it won't re-attract the people who didn't want to raid in the first place and departed disappointed. It's closing the barn doors after the horses have gotten out and also deleted the barn from their hard drives.

Therein lies the problem. However necessary this change is -- and it is necessary! -- it's a change that would have mattered only if it had been made months ago. This is no longer the dominant problem the game is facing. The chief goals of the developers at this point needs to be mollifying the players, fixing the mess that has been made of non-raid progression, and convincing players that the game will still be around in a year, not fixing the raid problems illuminated long before launch.

WildStar is also not helped at all by repeated developer statements that the change in size won't result in the content being made easier. Leaving aside the question of whether the core amount of challenge is the number of people involved in the first place, I think these statements create an image, fair or not, of a development team more afraid of reducing challenge than trying to make the most fun and playable game possible. And that, more than anything, gives me pause. It makes me wonder whether this is the start of the paradigm shift that the game needed months ago or an organized retreat, and whether either one can make enough of a change given limited time.

It's a smart change all the same, though.

As always, feedback is welcome in the comments below or via mail to eliot@massively.com. Next time around, I'd like to talk in more detail about the patch, beyond just a glib statement for the start. (I pick my battles.)

Here's how it is: The world of Nexus can be a dangerous place for a tourist or a resident. If you're going to venture into WildStar, you want to be prepared. That's why Eliot Lefebvre brings you a shiny new installment of The Nexus Telegraph every other Monday, giving you a good idea of what to expect from both the people and the environment. Keep your eyes peeled, and we'll get you where you need to go.
In this article: carbine, carbine-studios, column, dungeon, dungeons, endgame, featured, ncsoft, nexus, nexus-telegraph, opinion, progress, progression, progression-models, raid, raid-size, raids, sandpark, sci-fantasy, sci-fi, the-nexus-telegraph, wildstar
All products recommended by Engadget are selected by our editorial team, independent of our parent company. Some of our stories include affiliate links. If you buy something through one of these links, we may earn an affiliate commission.