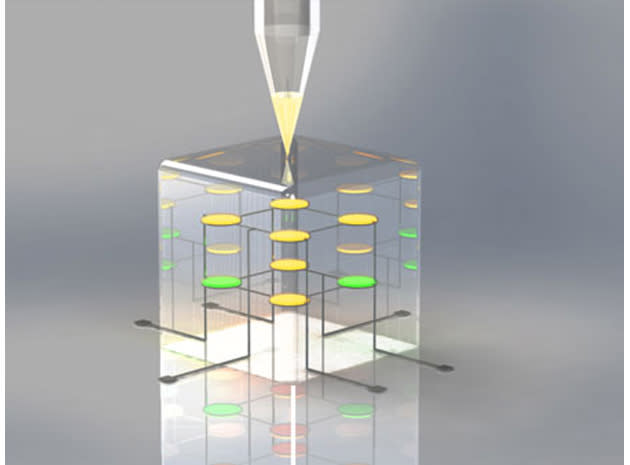 You can use 3D printing to make a handful of electronics, such as antennas and batteries, but LEDs and semiconductors have been elusive; you usually need some other manufacturing technique to make them work, which limits what they can do and where they'll fit. A team of Princeton researchers recently solved this problem, however. They've found a way to make quantum dot LEDs (and thus semiconductors) using only a 3D printer. The scientists choose printable electrodes, polymers and semiconductors, which are dissolved in solvents to keep them from damaging underlying layers during the printing process; after that, the team uses design software to print the materials in interweaving patterns. In this case, the result is a tiny LED that you could print on to (or into) many objects, including those with curved surfaces.

The researchers believe that the current technology could be used to make smart contact lenses with built-in displays, or bionic implants that use lights to stimulate nerves. That's only just the start of what's possible, however. Since the approach should work with other semiconductors, it could be used to put solar cells, transistors and other electronics into places where they'd have previously been impractical or impossible. The Princeton scientists will have to to improve their 3D printing resolution and performance before that happens, but you could be looking at the key to a future generation of flexible and wearable gadgets.

In this article: 3dprinting, led, lighting, princeton, qled, quantumdot, science, semiconductor, wearable
All products recommended by Engadget are selected by our editorial team, independent of our parent company. Some of our stories include affiliate links. If you buy something through one of these links, we may earn an affiliate commission.