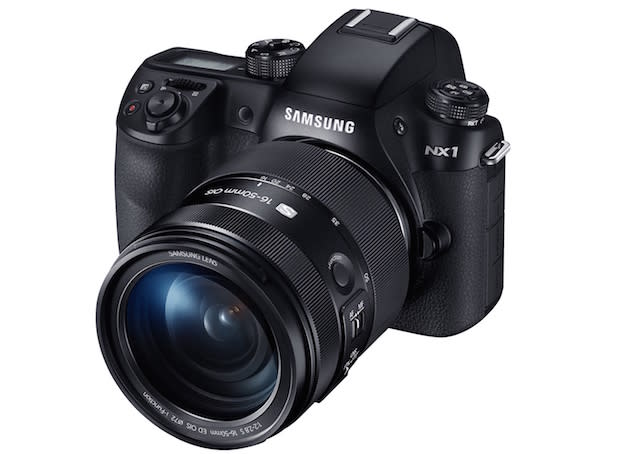 The NX1, Samsung's first camera capable of shooting 4K video, was originally expected to be released last month here in the States. And even though this was clearly not the case, the company has been doing everything it can to hype up its new compact system in the meantime, including a partnership with Joseph Gordon-Levitt to create a film, titled In a City, that's going to be shot entirely with the NX1. On paper, the camera seems like great option, featuring a 28.2-megapixel, APS-C CMOS sensor, 15fps of continuos shooting, a 3-inch Super AMOLED articulating screen, an EVF with a 1,366 x 758 resolution, NFC and WiFi.

There's also a new auto-focusing system inside, which Samsung claims can detect up to 205 different phase points and cover roughly 90 percent of the whole frame. If you're interested, be ready to break the bank: Samsung is pricing the NX1 at $1,500 body-only, or $2,800 with a 16-50mm lens, a grip, extra battery and an external charger.

Although Samsung told us the NX1 should be on sale now, most US retailers appear to only have it up for pre-order at the moment. Either way, have your wallet prepared, because it won't be long until it's up for grabs.

In this article: 4K, 4K Camera, NX 1, NX1, Samsung, Samsung NX 1, Samsung NX1, SamsungNX1
All products recommended by Engadget are selected by our editorial team, independent of our parent company. Some of our stories include affiliate links. If you buy something through one of these links, we may earn an affiliate commission.