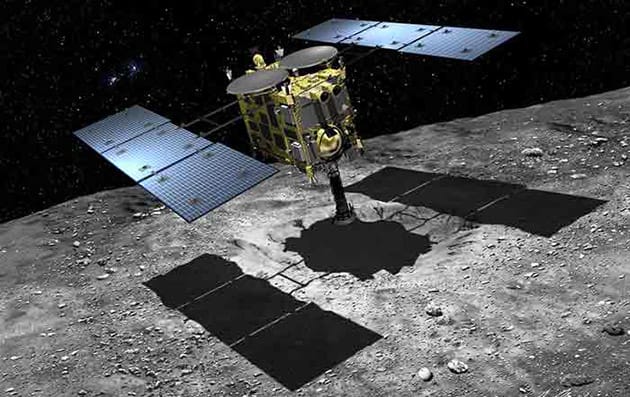 On November 30th, Japan's Hayabusa 2 will be leaving leaving Earth aboard a Mitsubishi-made rocket to make its way to an asteroid -- but not to blow it up. The Japanese spacecraft will follow in its predecessor's footsteps and observing a space rock for science (of course). But unlike the first Hayabusa that explored an asteroid rich in silicate and nickel-iron, this one's headed for one that's made of clay and rocks: materials that could contain organic matter and water. The unmanned vehicle will traverse outer space for more than three years until it finds asteroid "1999 JU3," which it's scheduled to reach by June 2018.

After it rendezvous with the celestial body, the vehicle will release a lander called MASCOT and a rover called MINERVA 2 on its surface. That rover will be in charge of assessing the terrain and finding the best locations where Hayabusa 2 can collect samples by performing a series of perch-collect-and-go maneuvers. It's only near the end of its 18-month mission that the vehicle will deploy an ominous-sounding equipment called the "impactor," which will create a crater where the spacecraft can collect subsurface material.

If all goes well, Hayabusa 2 will start its journey back home in December 2019 and touch down a year later, carrying a wealth of samples with it. 1999 JU3, by the way, belongs to a type of asteroids considered as some of the oldest objects in our solar system. JAXA's scientists are hoping that the materials taken from it can provide clues on where our water came from and how life on Earth began.

Update (December 2): The launch is just minutes away, watch live in the video stream embedded below.

Watch live streaming video from spaceflightnow at livestream.com
[Image credit: JAXA]
Source: The Wall Street Journal, NASA, JAXA
In this article: 1999JU3, asteroid, hayabusa, hayabusa2, JAXA, NASA, space, video
All products recommended by Engadget are selected by our editorial team, independent of our parent company. Some of our stories include affiliate links. If you buy something through one of these links, we may earn an affiliate commission.