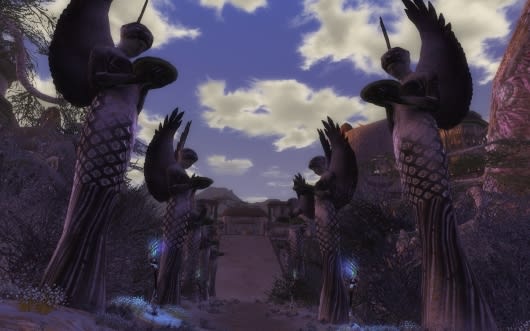 Maybe it's just me, but it seems like your character's choice of religion (or not) was far more of a feature of pen-and-paper RPGs than in most CRPGs and MMOs. I can't think of many MMOs where you're ever asked to assign a fictional religion or deity to your character, save perhaps for Neverwinter's cosmetic choice and a more beneficial (and optional) selection in EverQuest II. Oh, and I think that some of the Guild Wars 2 races ask you to pick a deity as part of your personal story, so there's that.

But that doesn't mean that your character can't have a deity to worship, if only in your own mind. After all, combat prowess isn't the beginning, middle, and end of character development. Does your character adhere to one of the faiths in the game? Does he or she have a patron saint of the underdark that is prayed to on a regular basis?

Every morning, the Massively bloggers probe the minds of their readers with deep, thought-provoking questions about that most serious of topics: massively online gaming. We crave your opinions, so grab your caffeinated beverage of choice and chime in on today's Daily Grind!
In this article: daily-grind, deity, everquest-ii, faith, god, gods, neverwinter, opinion, religion, tdg, the-daily-grind
All products recommended by Engadget are selected by our editorial team, independent of our parent company. Some of our stories include affiliate links. If you buy something through one of these links, we may earn an affiliate commission.