Ferrari won't produce an EV until after 2025

Ferrari's first production plug-in hybrid is its fastest supercar yet

What to expect from the Geneva Motor Show 2019 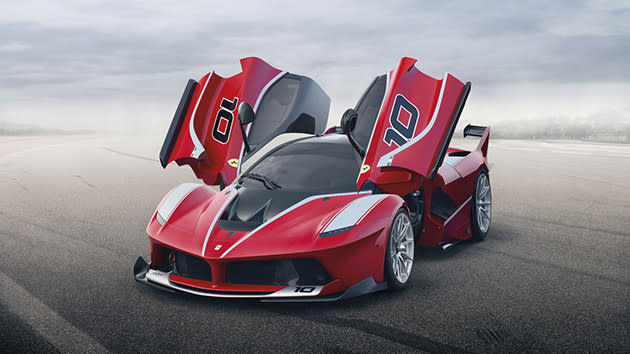 LaFerrari was already a beast, but the folks in Maranello wanted to make an even more aggressive hybrid -- thus, the FXX K was born. This supercar boasts an 848HP V12 engine (its predecessor has a 789HP one) and an electric motor that can generate 187HP (up from the LaFerrari's 160HP). The newer supercar inherited its older sibling's kinetic energy recovery system (KERS) that stores energy harnessed from braking. But it was redesigned from the original FXX to be more aerodynamic, with a higher tail section and new components to lessen drag. Bad news is, even if you're willing to empty your bank account, you can't exactly get one.

See, the hypercar was named as such, because it's part of Ferrari's XX Program, which allows the uber rich to drive the brand's experimental vehicles in exchange for major bucks. They can only do so on company-approved tracks, though, and they can't take the sweet, sweet hypercars home. Ferrari can get direct input from some of its top customers that way and use those suggestions to improve its other models. As for the K in its name, well, that came from its KERS capability, as you might have guessed. If you're in Abu Dhabi this coming weekend, you can at least see this "FXX on steroids" in person at the company's Finali Mondiali event, where it will be officially launched. In this article: Ferrari, fxx, fxxk, hybrid, LaFerrari
All products recommended by Engadget are selected by our editorial team, independent of our parent company. Some of our stories include affiliate links. If you buy something through one of these links, we may earn an affiliate commission.