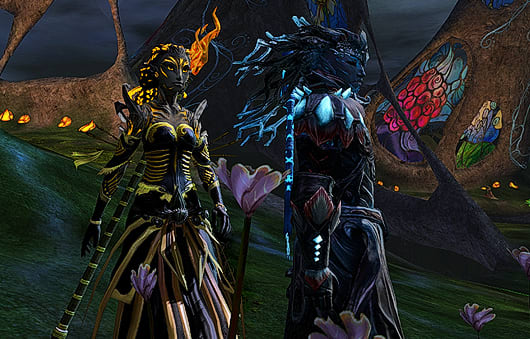 They say that those who don't learn from history are doomed to repeat it. I don't know who "they" are, but I don't think that particular truism was ever meant to cover a literal repeat of history. Guild Wars 2's latest living world content release has players doing exactly that: planting memory seeds, taking an uncomfortably invasive peek into Caithe's past, and trying to figure out exactly what might have led her to abscond with Glint's egg in the previous chapter.

This stroll down memory lane technically takes place over 20 years in GW2's history, but it's new information to us, and so the statute of limitations on spoilers hasn't expired. You'll probably want to play the content before reading any further, unless you think my writing is improved by a lack of context (if that's the case, don't tell me).

See the pretty girl in that mirror there? Who could that attractive girl be?

The Pale Tree's memory seeds let players walk a mile -- give or take -- in Caithe's shoes by allowing us to control her as a character. I really wanted to enjoy that, but I went in fully intending to use my giant Sylvari Guardian's giant Sylvari Guardian skills and instead ended up using the skills of a much smaller Sylvari Thief. Yes, Caithe is terribly, wonderfully overpowered, and she has neato daggers, which my magic 8-ball predicts ArenaNet will offer for sale in the gem store in the near future. Despite the relatively short length of the chapter, it was still a long time to play without using my own character.

Normally I'm not touchy about stuff like that, and I'm the first one to jump in the mecha siege devourers or grab Kodan form in Edge of the Mists. I think the issue for me with playing Caithe is that she's not fundamentally different enough from a regular player character to have much novelty value, no matter how powerful she is. It didn't quite work for me as a storytelling mechanic, either, since as a proxy for the player character, Caithe couldn't have as much ambient dialogue or independent action as the other NPCs. Experiencing events as Caithe sharpens the impact of what the missions ask you to do, but it also means that she ends up mostly following the lead of dynamic characters like Faolain.

The Metrica mission was quite a bit of fun, even though at first I plainly sucked at the stealth aspects. It did highlight for me what I miss about not having extended stealth available in GW2 as a gameplay mechanic compared to other games I've played: Being sneaky in PvE and getting to wander undetected through enemy strongholds is super fun. Both the boss fight there and the battle against Togonn Windmane are more variations on the "complete intermittent objectives to get back to fighting the boss" mechanic set, but the emotional impact of the Togonn fight is enough to carry it. I have never felt so awful after winning a fight in GW2. 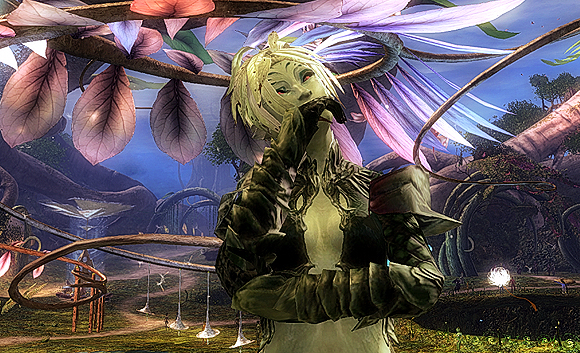 Don't you know that you're toxic

This episode answers the long-standing question of whether Faolain might have actually been a decent person before leaving the Grove, and the answer isn't pretty. In Caithe's memory seed flashbacks, Faolain is manipulative and selfish, cunning yet emotionally short-sighted. She is mortally offended by slights against herself but places little value on the experiences and agency of others. Even when she appears to take an interest in the well-being of the newly awakened Secondborn, she can't let the opportunity to indulge in some self-centered drama pass by: When she had nothing to do in the Metrica instance, she stood by and wailed at Caithe to work faster because the saplings were dying. As small a detail as that was -- and as harmless as it might look to someone who has never had a Faolain in his or her own life -- it illustrated a great deal about Faolain as a character and the relationship she had with Caithe. Instead of being a supporting presence when Caithe was under pressure, she notched up the stress level and subtly directed attention to herself.

Caithe and Faolain are only partners insofar as Faolain leverages Caithe's feelings for her to gain her support and then expects Caithe to share equally in the consequences. Sure, Faolain says a lot of pretty, loving words, but her actions speak eloquently as to how she actually sees Caithe: as an accessory. She drags her into her schemes and rivalries and even places her in physical danger with her machinations. She instructs Caithe to do things, complicates those things by her actions, and then leaves Caithe to smooth over the resulting mess.

While some players are confused as to why Caithe would stay with Faolain when she was so obviously terrible from the beginning, I think this chapter sheds a lot of light on Caithe's more recent behavior. People like Faolain are very hard to get away from because they excel at ensuring that anyone they're involved with feels obligated to give and give so that they can take and take, all without making it obvious that their behavior is the real problem with the relationship. Caithe's difficulty in letting people she cares about close and even her temptation to return to Faolain make sense: Her formative years were apparently spent in a truly unhealthy relationship.

I take Faolain's complaints of the Pale Tree's perfectionism with extra salt, too, although there's undoubtedly some truth to it. It wouldn't be the first time a child struggled under the expectations of her parents. The Firstborn are expected to be leaders and examples for the rest of their species, which is quite a load to bear for people so young and so few in number. Most of those we've met do bear it, however, each in his or her own way and with varying degrees of responsibility. Faolain's villainous failing, like Cadeyrn's, was not wanting to do something different but insisting on trying to drag everyone else along with her.

I don't think there exists a GW2 villain faction -- no matter how vile -- that doesn't have a few apologists ready to argue that they're just misunderstood and what a great twist it would be if their heroic opposition turned out to be the real bad guys, but I can understand why some folks are disappointed that Faolain and the Nightmare Court haven't been portrayed as more complex. A lack of ambiguity doesn't really hurt them, though.

I've written before about why I believe the Sylvari story is driven by themes of free will and self-determination, and I think some fans were hoping that the Nightmare Court would provide the free-thinking counterpart to the Pale Tree's morality. The truth is that the Nightmare Court is about as far from pushing freedom as you can get, and the other Sylvari are the ones capable of complex moral reasoning and shades of grey: They have guidelines for living but must navigate a world in which abiding by all of them isn't always possible. The best they can hope for is to do what they can because life is messy; the Nightmare Court is the group that insists violently on the entire race marching in ideological lockstep.

The irony in this is underscored if you have Caithe speak to Cadeyrn in the first instance, as she will casually suggest that he ignore Ventari's tenets if he doesn't like them. He claims that the tenets are forced down their throats and that they are all expected to fall in line. This is the person who would go on to found a group that makes extensive use of torture and irreversible magical brainwashing. 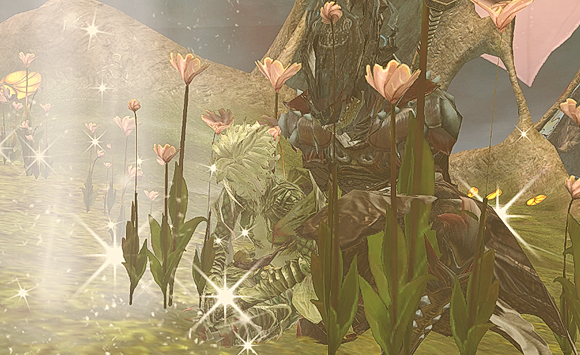 A long run for a short slide

The last two episodes have been fairly short, although this one also added a massive jumping puzzle to the Silverwastes (one I haven't tried yet because I'm a wimp and find its length intimidating). When Marjory said she had to return to the Priory to research the door we'd just found, I groaned inwardly. Neither of the past two chapter cliffhangers has been very satisfying for me, mostly because we didn't get enough information during the chapters themselves to speculate heavily. Glint's egg and its purpose are a near-total mystery, so there isn't much space to dig into why Caithe would want to take it that we haven't already covered. Wynne's secret and the serpent glyph door are interesting, but we didn't gain enough new information to really start an in-depth discussion.

Nevertheless, there were a few interesting reveals: Vorpp, who helped us during Queen's Jubilee, has an unexpectedly horrific side. Our prickly friend Canach was the subject of cruel Asuran experimentation. Caithe has had to live with having perpetrated at least one atrocity. This is more shading in the details than laying down bold new lines, but it's still important. I'm also increasingly convinced that Marjory's greatsword is setting the stage for new weapon options.

I greatly appreciated Bobby Stein's clarification on a bit of text that seemed an unintentional retcon: During the first memory in the Grove, a few NPCs mention that the Firstborn Riannoc is away and that a few of the Secondborn have already died. That Riannoc was the first of the Sylvari to die carries a lot of weight in the personal story. Stein explained on the official forums that the contradiction was a slip and would be corrected.

Firsthand exploration of past events that have only been described vaguely before are always fraught with the possibility of that sort of thing, which is why I tend to give flashbacks the ol' hairy eyeball. Sometimes writers will double down on contradictions, either by performing a casual retcon of previous writing or by trying to give an in-universe explanation. This means that fans have to work the conflicting, often flimsy new information into our understanding of the story, and so it actually disrupts my immersion less to hear, "No, that was a mistake."

As I'm writing this article, we still haven't heard whether we're going to be getting Wintersday instead of or in addition to the next living world chapter next week. My guess is that we're going to get both, since this year's Wintersday event -- like Halloween -- is going to be a replay of last year. That dashes my hopes of seeing A Wintersday Carol play out with Evonezer Scroogeblade learning the true meaning of giving, but festive decorations in the ruins of Lion's Arch will probably feel Dickensian enough already.

What do you think we can look forward to next week? Are you hoping for anything special in your ugly wool sock for Wintersday? Do you think maybe Dwayna sits around drinking hot cocoa this time of year and feeling sad that the human kids are too old for her and Grenth to play snowball fight any more? I mean, you blink and 250 years pass and they've got multicultural festivals to go to with their friends and all you can do is watch seasonal movies in your slippers. So it goes.

Anatoli Ingram suffers from severe altitis, Necromancitosis, and Guild Wars 2 addiction. The only known treatment is writing Massively's biweekly Flameseeker Chronicles column, which is published every other Tuesday. His conditions are contagious, so contact him safely at anatoli@massively.com. Equip cleansing skills -- just in case.
In this article: anet, arenanet, buy-to-play, caithe, fantasy, faolain, featured, flameseeker-chronicles, guild-wars, guild-wars-2, gw, gw1, gw2, living world, lore, ncsoft, nightmare-court, opinion, seeds-of-truth, sylvari
All products recommended by Engadget are selected by our editorial team, independent of our parent company. Some of our stories include affiliate links. If you buy something through one of these links, we may earn an affiliate commission.