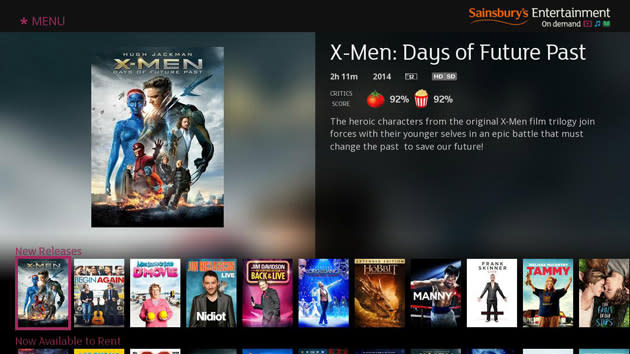 It's been a long time coming, and something we know many of you have been waiting with bated breath for: Sainsbury's has finally released a Roku app for its Entertainment film and TV streaming service. Wait, let's backtrack a second... Sainsbury's runs a streaming service!? To be honest, it's something we'd completely forgotten about, though it's available on Android, iOS, Xbox 360, and now Roku's lineup of streaming devices. Sainsbury's Entertainment offers movies and TV shows for purchase or rental, thus bearing more than a passing resemblance to Tesco's Blinkbox service -- something we tend to hear more about given it's actually advertised, promoted on the rival supermarket's Hudl tablets, and thought to be in jeopardy of being sold off or shut down. Sainsbury's Entertainment appears to have a pretty up-to-date selection of things to watch, so it might be worth checking out. Choice is always appreciated, after all, and being able to pay for purchases and rentals with Nectar points ain't so bad either.

In this article: hdpostcross, roku, sainsburys, sainsburysentertainment
All products recommended by Engadget are selected by our editorial team, independent of our parent company. Some of our stories include affiliate links. If you buy something through one of these links, we may earn an affiliate commission.