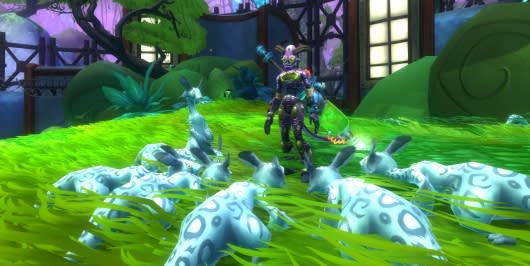 The first major WildStar update of 2015 is available on the test servers now. Yes, there's a little time before it actually goes live for everyone. Creative Director Chad Moore took the opportunity today to explain to the community everything contained within the new update, starting with the addition of two new dungeons (the Protostar Academy and the Ultimate Protogames), a new Shiphand mission, and the addition of veteran-level Shiphand missions that can still be cleared solo or in a group as you'd like.

This update also includes new housing options, cosmetic options for characters (including the ability to edit your appearance post-character creation), and the addition of the new Glory currency for completing dungeons and raids, which can be exchanged for high-end equipment. Last but not least, it's the update that includes the long-discussed drop of the Datascape raid down to 20 players, making it less of a challenge to assemble a roster for this content. While it remains to be seen how well the update actually plays, it looks to be filled with a number of positive changes for the game.

In other WildStar news today, the studio is running holiday promotion during December. "Carbine wanted to wish everyone a Happy Holiday and spread some cheer by giving out 12 Days of Boom Boxes," wrote Community Manager Tony Rey yesterday. "Everyone that has logged into WildStar during the month of December (12/1-12/15) will receive these sweet little bundles of potential."

7
Source: Dev post
Coverage: Official Site
In this article: carbine, carbine-studios, dungeon, dungeons, endgame, endgames, game-mechanics, ncsoft, news, news-items, patch, patch-preview, patches, raid, raids, sandpark, sci-fantasy, sci-fi, update, updates, wildstar, ws
All products recommended by Engadget are selected by our editorial team, independent of our parent company. Some of our stories include affiliate links. If you buy something through one of these links, we may earn an affiliate commission.