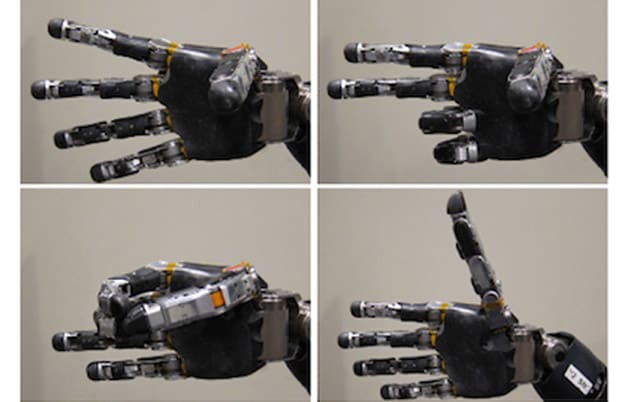 At Expand NY in November, DARPA Director Arati Prabhakar talked about the erm, friendlier projects the agency is funding, including a mind-controlled robotic arm tested by Pittsburgh native Jan Scheuermann. Her test run has recently ended, but the University of Pittsburgh researchers in charge of project have published a paper detailing how much the limb has improved over the past two years. Before they took off Jan's implants, she could already move not just arm itself, but also its wrist and fingers -- she reportedly even beat her brother at a rock-paper-and-scissors game. "Overall, our results indicate that highly coordinated, natural movement can be restored to people whose arms and hands are paralyzed," said Pitt School of Medicine professor Andrew Schwartz, Ph.D.

In 2012, the scientists surgically placed the neural implants in the parts of Scheuermann's brain that used to control her right arm and hand before she lost control of everything below the neck. Jan even made a splash online that year when the researchers posted a video of her eating a chocolate bar with the robotic limb. To be able to read Jan's thoughts, the scientists had her watch animations of hand-arm movements and instructed her to imagine doing them. They then used the brain patterns detected during the process to program the arm, so that it moves accordingly.

Now that Jan's tests are done, the scientists are looking for more volunteers in an effort to further improve the technology. They still need to fix an issue that causes it to stall when it's holding an object, as well as to find a way to turn it into a wireless, wheelchair-mounted device, if they want it to be useful outside a lab. Of course, they aren't the only research team working on a bionic limb controlled by thoughts alone. BrainGate is developing a very similar limb, while Duke University scientists have created a mind-controlled exoskeleton that Juliana Pinto used to open the World Cup in June.

Via: NBC News
Source: IOPScience, Eurekalert
In this article: arm, bionic, BionicArm, mind-control, roboticlimbs
All products recommended by Engadget are selected by our editorial team, independent of our parent company. Some of our stories include affiliate links. If you buy something through one of these links, we may earn an affiliate commission.