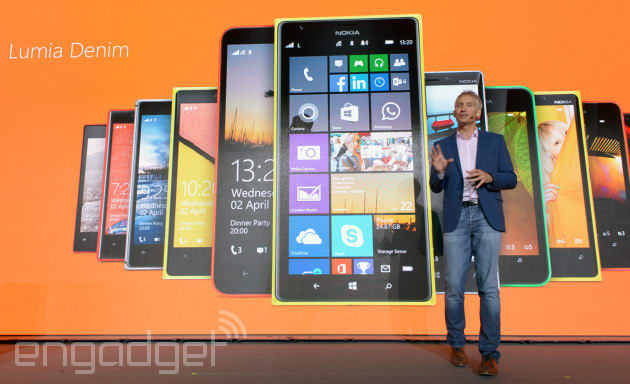 Some Lumia owners will be able to take photos more quickly these holidays -- and they might be better, too -- now that Microsoft has begun rolling out its latest software update called Denim. We say "some," because only Lumia 830, Lumia 930, Lumia Icon and Lumia 1520 owners will be able to enjoy the new features for now, and only if they live in one of the select countries getting the update. Denim, which was announced back in September, speeds up the Lumia camera app and brings image quality-boosting features with it. The new Rich Capture mode, for instance, automatically uses HDR, Dynamic Flash and Dynamic Exposure to take pictures, while a new imaging algorithm allows it to snap crisper daylight and lowlight images.

Users who do get Denim will also be able to record 4K videos with one long press of the camera button and activate Microsoft's voice assistant with a simple "Hey, Cortana." According to Microsoft's list of software availability, the update's now available in several European and Asian countries. Everyone in the US and owners of other Lumia models will likely have to wait until Denim's wider release in January. Note that it can only be installed on a phone already running Lumia Cyan, though, so those still waiting for the previous software update will have to make do without the new features for a while.

Source: Lumia Conversations
In this article: lumia, lumiadenim, mobilepostcross, nokia
All products recommended by Engadget are selected by our editorial team, independent of our parent company. Some of our stories include affiliate links. If you buy something through one of these links, we may earn an affiliate commission.